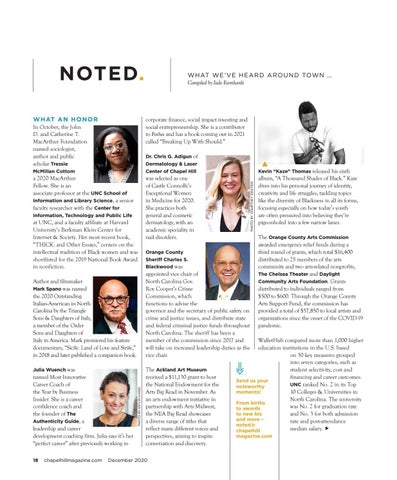 NOTED. WHAT AN HONOR

a 2020 MacArthur Fellow. She is an associate professor at the UNC School of Information and Library Science, a senior faculty researcher with the Center for Information, Technology and Public Life

at UNC, and a faculty affiliate at Harvard University’s Berkman Klein Center for Internet &amp; Society. Her most recent book, “THICK: and Other Essays,” centers on the intellectual tradition of Black women and was shortlisted for the 2019 National Book Award in nonfiction.

appointed vice chair of North Carolina Gov. Roy Cooper’s Crime Commission, which functions to advise the governor and the secretary of public safety on crime and justice issues, and distribute state and federal criminal justice funds throughout North Carolina. The sheriff has been a member of the commission since 2017 and will take on increased leadership duties as the vice chair.

Author and filmmaker Mark Spano was named the 2020 Outstanding Italian-American in North Carolina by the Triangle Sons &amp; Daughters of Italy, a member of the Order Sons and Daughters of Italy in America. Mark premiered his feature documentary, “Sicily: Land of Love and Strife,” in 2018 and later published a companion book.

The Ackland Art Museum received a $11,130 grant to host the National Endowment for the Arts Big Read in November. As an arts endowment initiative in partnership with Arts Midwest, the NEA Big Read showcases a diverse range of titles that reflect many different voices and perspectives, aiming to inspire conversation and discovery.

album, “A Thousand Shades of Black.” Kaze dives into his personal journey of identity, creativity and life struggles, tackling topics like the diversity of Blackness in all its forms, focusing especially on how today’s youth are often pressured into believing they’re pigeonholed into a few narrow lanes. The Orange County Arts Commission awarded emergency relief funds during a third round of grants, which total $16,400 distributed to 25 members of the arts community and two arts-related nonprofits, The Chelsea Theater and Daylight Community Arts Foundation. Grants distributed to individuals ranged from $500 to $600. Through the Orange County Arts Support Fund, the commission has provided a total of $57,850 to local artists and organizations since the onset of the COVID-19 pandemic.

WalletHub compared more than 1,000 higher education institutions in the U.S. based on 30 key measures grouped into seven categories, such as student selectivity, cost and financing and career outcomes. Send us your UNC ranked No. 2 in its Top noteworthy moments! 10 Colleges &amp; Universities in North Carolina. The university From births was No. 2 for graduation rate to awards to new biz and No. 3 for both admission and more – rate and post-attendance noted@ median salary.  chapelhill

named Most Innovative Career Coach of the Year by Business Insider. She is a career confidence coach and the founder of The Authenticity Guide, a leadership and career development coaching firm. Julia says it’s her “perfect career” after previously working in

was selected as one of Castle Connolly’s Exceptional Women in Medicine for 2020. She practices both general and cosmetic dermatology, with an academic speciality in nail disorders.

corporate finance, social impact investing and social entrepreneurship. She is a contributor to Forbes and has a book coming out in 2021 called “Breaking Up With Should.”