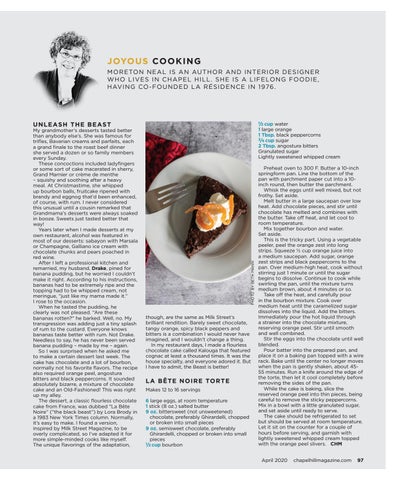 JOYO U S CO O KING MORETON NE AL IS AN AUTHOR AND INTERIOR DESIGNER WHO LIVES IN CHAPEL HILL. SHE IS A LIFELONG FOODIE, HAVING CO-FOUNDED LA RÉSIDENCE IN 1976.

My grandmother’s desserts tasted better than anybody else’s. She was famous for trifles, Bavarian creams and parfaits, each a grand finale to the roast beef dinner she served a dozen or so family members every Sunday. These concoctions included ladyfingers or some sort of cake macerated in sherry, Grand Marnier or crème de menthe – squishy and soothing after a heavy meal. At Christmastime, she whipped up bourbon balls, fruitcake ripened with brandy and eggnog that’d been enhanced, of course, with rum. I never considered this unusual until a cousin remarked that Grandmama’s desserts were always soaked in booze. Sweets just tasted better that way! Years later when I made desserts at my own restaurant, alcohol was featured in most of our desserts: sabayon with Marsala or Champagne, Galliano ice cream with chocolate chunks and pears poached in red wine. After I left a professional kitchen and remarried, my husband, Drake, pined for banana pudding, but he worried I couldn’t make it right. According to his instructions, bananas had to be extremely ripe and the topping had to be whipped cream, not meringue, “just like my mama made it.” I rose to the occasion. When he tasted the pudding, he clearly was not pleased. “Are these bananas rotten?” he barked. Well, no. My transgression was adding just a tiny splash of rum to the custard. Everyone knows bananas taste better with rum. Not Drake. Needless to say, he has never been served banana pudding – made by me – again. So I was surprised when he asked me to make a certain dessert last week. The cake has chocolate and a lot of bourbon, normally not his favorite flavors. The recipe also required orange peel, angostura bitters and black peppercorns. It sounded absolutely bizarre, a mixture of chocolate cake and an Old-Fashioned! This was right up my alley. The dessert, a classic flourless chocolate cake from France, was dubbed “La Bête Noire” (“the black beast”) by Lora Brody in a 1983 New York Times column. Normally, it’s easy to make. I found a version, inspired by Milk Street Magazine, to be overly complicated, so I’ve adapted it for more simple-minded cooks like myself. The unique flavorings of the adaptation,

though, are the same as Milk Street’s brilliant rendition. Barely sweet chocolate, tangy orange, spicy black peppers and bitters is a combination I would never have imagined, and I wouldn’t change a thing. In my restaurant days, I made a flourless chocolate cake called Kalouga that featured cognac at least a thousand times. It was the house specialty, and everyone adored it. But I have to admit, the Beast is better!

Preheat oven to 300 F. Butter a 10-inch springform pan. Line the bottom of the pan with parchment paper cut into a 10inch round, then butter the parchment. Whisk the eggs until well mixed, but not frothy. Set aside. Melt butter in a large saucepan over low heat. Add chocolate pieces, and stir until chocolate has melted and combines with the butter. Take off heat, and let cool to room temperature. Mix together bourbon and water. Set aside. This is the tricky part. Using a vegetable peeler, peel the orange zest into long strips. Squeeze ⅓ cup orange juice into a medium saucepan. Add sugar, orange zest strips and black peppercorns to the pan. Over medium-high heat, cook without stirring just 1 minute or until the sugar begins to dissolve. Continue to cook while swirling the pan, until the mixture turns medium brown, about 4 minutes or so. Take off the heat, and carefully pour in the bourbon mixture. Cook over medium heat until the caramelized sugar dissolves into the liquid. Add the bitters. Immediately pour the hot liquid through a strainer into the chocolate mixture, reserving orange peel. Stir until smooth and well combined. Stir the eggs into the chocolate until well blended. Pour batter into the prepared pan, and place it on a baking pan topped with a wire rack. Bake until the center no longer moves when the pan is gently shaken, about 4555 minutes. Run a knife around the edge of the torte, then let it cool completely before removing the sides of the pan. While the cake is baking, slice the reserved orange peel into thin pieces, being careful to remove the sticky peppercorns. Mix in a bowl with a little granulated sugar, and set aside until ready to serve. The cake should be refrigerated to set but should be served at room temperature. Let it sit on the counter for a couple of hours before serving, and garnish with lightly sweetened whipped cream topped with the orange peel slivers. CHM April 2020