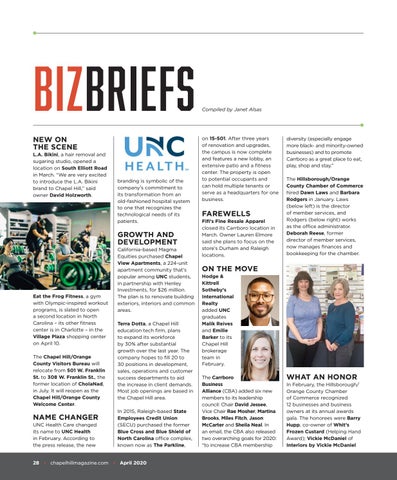 BIZBRIEFS NEW ON THE SCENE

branding is symbolic of the company’s commitment to its transformation from an old-fashioned hospital system to one that recognizes the technological needs of its patients.

Eat the Frog Fitness, a gym with Olympic-inspired workout programs, is slated to open a second location in North Carolina – its other fitness center is in Charlotte – in the Village Plaza shopping center on April 10. The Chapel Hill/Orange County Visitors Bureau will relocate from 501 W. Franklin St. to 308 W. Franklin St., the former location of CholaNad, in July. It will reopen as the Chapel Hill/Orange County Welcome Center.

NAME CHANGER UNC Health Care changed its name to UNC Health in February. According to the press release, the new

California-based Magma Equities purchased Chapel View Apartments, a 224-unit apartment community that’s popular among UNC students, in partnership with Henley Investments, for $26 million. The plan is to renovate building exteriors, interiors and common areas. Terra Dotta, a Chapel Hill education tech firm, plans to expand its workforce by 30% after substantial growth over the last year. The company hopes to fill 20 to 30 positions in development, sales, operations and customer success departments to aid the increase in client demands. Most job openings are based in the Chapel Hill area. In 2015, Raleigh-based State Employees Credit Union (SECU) purchased the former Blue Cross and Blue Shield of North Carolina office complex, known now as The Parkline,

on 15-501. After three years of renovation and upgrades, the campus is now complete and features a new lobby, an extensive patio and a fitness center. The property is open to potential occupants and can hold multiple tenants or serve as a headquarters for one business.

diversity (especially engage more black- and minority-owned businesses) and to promote Carrboro as a great place to eat, play, shop and stay.” The Hillsborough/Orange County Chamber of Commerce hired Dawn Laws and Barbara Rodgers in January. Laws (below left) is the director of member services, and Rodgers (below right) works as the office administrator. Deborah Reese, former director of member services, now manages finances and bookkeeping for the chamber.