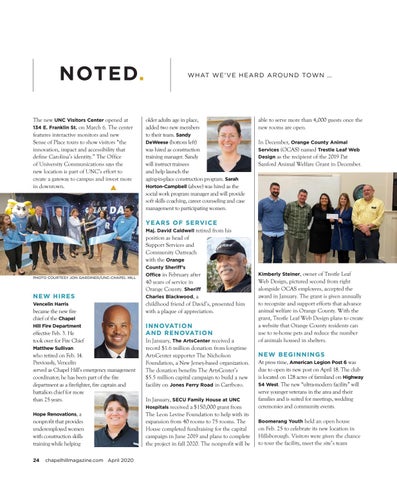 NOTED. The new UNC Visitors Center opened at 134 E. Franklin St. on March 6. The center features interactive monitors and new Sense of Place tours to show visitors “the innovation, impact and accessibility that define Carolina’s identity.” The Office of University Communications says the new location is part of UNC’s effort to create a gateway to campus and invest more in downtown.

able to serve more than 4,000 guests once the new rooms are open. In December, Orange County Animal Services (OCAS) named Trestle Leaf Web Design as the recipient of the 2019 Pat Sanford Animal Welfare Grant in December.

YEARS OF SERVICE Maj. David Caldwell retired from his

effective Feb. 3. He took over for Fire Chief Matthew Sullivan

who retired on Feb. 14. Previously, Vencelin served as Chapel Hill’s emergency management coordinator; he has been part of the fire department as a firefighter, fire captain and battalion chief for more than 25 years. Hope Renovations, a

County Sheriff’s Office in February after

40 years of service in Orange County. Sheriff Charles Blackwood, a childhood friend of David’s, presented him with a plaque of appreciation.

INNOVATION AND RENOVATION In January, The ArtsCenter received a record $1.6 million donation from longtime ArtsCenter supporter The Nicholson Foundation, a New Jersey-based organization. The donation benefits The ArtsCenter’s $5.5 million capital campaign to build a new facility on Jones Ferry Road in Carrboro. In January, SECU Family House at UNC Hospitals received a $150,000 grant from The Leon Levine Foundation to help with its expansion from 40 rooms to 75 rooms. The House completed fundraising for the capital campaign in June 2019 and plans to complete the project in fall 2020. The nonprofit will be

Web Design, pictured second from right alongside OCAS employees, accepted the award in January. The grant is given annually to recognize and support efforts that advance animal welfare in Orange County. With the grant, Trestle Leaf Web Design plans to create a website that Orange County residents can use to re-home pets and reduce the number of animals housed in shelters.

NEW BEGINNINGS At press time, American Legion Post 6 was due to open its new post on April 18. The club is located on 128 acres of farmland on Highway 54 West. The new “ultra-modern facility” will serve younger veterans in the area and their families and is suited for meetings, wedding ceremonies and community events. Boomerang Youth held an open house

on Feb. 25 to celebrate its new location in Hillsborough. Visitors were given the chance to tour the facility, meet the site’s team