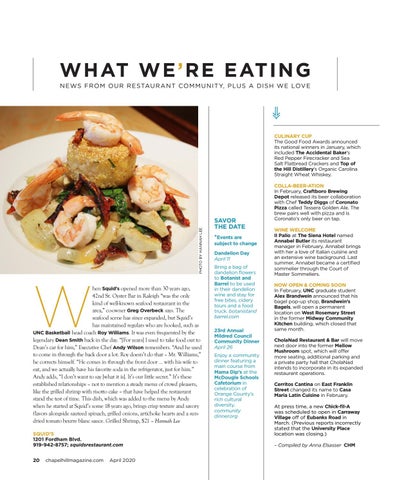 W H AT WE’RE EATING NEWS FROM OUR RESTAURANT COMMUNITY, PLUS A DISH WE LOVE

hen Squid’s opened more than 30 years ago, 42nd St. Oyster Bar in Raleigh “was the only kind of well-known seafood restaurant in the area,” co-owner Greg Overbeck says. The seafood scene has since expanded, but Squid’s has maintained regulars who are hooked, such as UNC Basketball head coach Roy Williams. It was even frequented by the legendary Dean Smith back in the day. “[For years] I used to take food out to Dean’s car for him,” Executive Chef Andy Wilson remembers. “And he used to come in through the back door a lot. Roy doesn’t do that – Mr. Williams,” he corrects himself. “He comes in through the front door ... with his wife to eat, and we actually have his favorite soda in the refrigerator, just for him.” Andy adds, “I don’t want to say [what it is]. It’s our little secret.” It’s these established relationships – not to mention a steady menu of crowd pleasers, like the grilled shrimp with risotto cake – that have helped the restaurant stand the test of time. This dish, which was added to the menu by Andy when he started at Squid’s some 18 years ago, brings crisp texture and savory flavors alongside sauteed spinach, grilled onions, artichoke hearts and a sundried tomato beurre blanc sauce. Grilled Shrimp, $21 – Hannah Lee SQUID’S 1201 Fordham Blvd. 919-942-8757; squidsrestaurant.com 20

SAVOR THE DATE *Events are

COLLA-BEER-ATION In February, Craftboro Brewing Depot released its beer collaboration with Chef Teddy Diggs of Coronato Pizza called Tessera Golden Ale. The brew pairs well with pizza and is Coronato’s only beer on tap. WINE WELCOME II Palio at The Siena Hotel named Annabel Butler its restaurant manager in February. Annabel brings with her a love of Italian cuisine and an extensive wine background. Last summer, Annabel became a certified sommelier through the Court of Master Sommeliers. NOW OPEN & COMING SOON In February, UNC graduate student Alex Brandwein announced that his bagel pop-up shop, Brandwein’s Bagels, will open a permanent location on West Rosemary Street in the former Midway Community Kitchen building, which closed that same month. CholaNad Restaurant & Bar will move next door into the former Mellow Mushroom spot, which will offer more seating, additional parking and a private party hall that CholaNad intends to incorporate in its expanded restaurant operations. Cerritos Cantina on East Franklin Street changed its name to Casa Maria Latin Cuisine in February. At press time, a new Chick-fil-A was scheduled to open in Carraway Village off of Eubanks Road in March. (Previous reports incorrectly stated that the University Place location was closing.) – Compiled by Anna Elsasser CHM