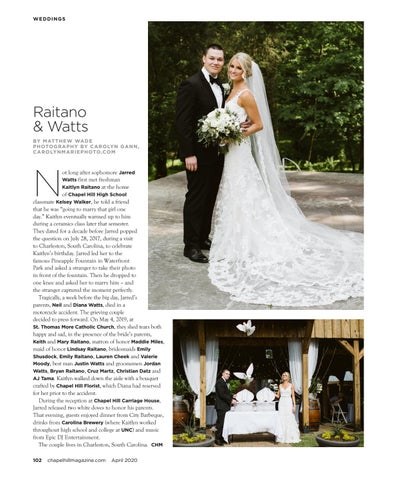 ot long after sophomore Jarred Watts first met freshman Kaitlyn Raitano at the home of Chapel Hill High School classmate Kelsey Walker, he told a friend that he was “going to marry that girl one day.” Kaitlyn eventually warmed up to him during a ceramics class later that semester. They dated for a decade before Jarred popped the question on July 28, 2017, during a visit to Charleston, South Carolina, to celebrate Kaitlyn’s birthday. Jarred led her to the famous Pineapple Fountain in Waterfront Park and asked a stranger to take their photo in front of the fountain. Then he dropped to one knee and asked her to marry him – and the stranger captured the moment perfectly. Tragically, a week before the big day, Jarred’s parents, Neil and Diana Watts, died in a motorcycle accident. The grieving couple decided to press forward. On May 4, 2019, at St. Thomas More Catholic Church, they shed tears both happy and sad, in the presence of the bride’s parents, Keith and Mary Raitano, matron of honor Maddie Miles, maid of honor Lindsay Raitano, bridesmaids Emily Shusdock, Emily Raitano, Lauren Cheek and Valerie Moody, best man Justin Watts and groomsmen Jordan Watts, Bryan Raitano, Cruz Martz, Christian Datz and AJ Tama. Kaitlyn walked down the aisle with a bouquet crafted by Chapel Hill Florist, which Diana had reserved for her prior to the accident. During the reception at Chapel Hill Carriage House, Jarred released two white doves to honor his parents. That evening, guests enjoyed dinner from City Barbeque, drinks from Carolina Brewery (where Kaitlyn worked throughout high school and college at UNC) and music from Epic DJ Entertainment. The couple lives in Charleston, South Carolina. CHM 102