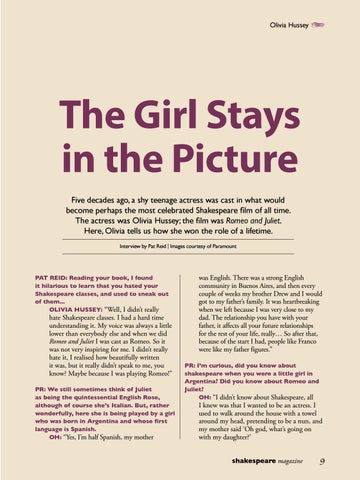 The Girl Stays in the Picture Five decades ago, a shy teenage actress was cast in what would FIGSQITIVLETWXLIQSWXGIPIFVEXIH7LEOIWTIEVI½PQSJEPPXMQI 8LIEGXVIWW[EW3PMZME,YWWI]XLI½PQ[EWRomeo and Juliet. ,IVI3PMZMEXIPPWYWLS[WLI[SRXLIVSPISJEPMJIXMQI Interview by Pat Reid |-QEKIWGSYVXIW]SJ4EVEQSYRX

PAT REID: Reading your book, I found it hilarious to learn that you hated your Shakespeare classes, and used to sneak out of them... OLIVIA HUSSEY: “Well, I didn’t really

hate Shakespeare classes. I had a hard time understanding it. My voice was always a little lower than everybody else and when we did Romeo and Juliet I was cast as Romeo. So it was not very inspiring for me. I didn’t really hate it, I realised how beautifully written it was, but it really didn’t speak to me, you know? Maybe because I was playing Romeo!”

PR: We still sometimes think of Juliet as being the quintessential English Rose, although of course she’s Italian. But, rather wonderfully, here she is being played by a girl who was born in Argentina and whose first language is Spanish. OH: “Yes, I’m half Spanish, my mother

was English. There was a strong English community in Buenos Aires, and then every couple of weeks my brother Drew and I would got to my father’s family. It was heartbreaking when we left because I was very close to my dad. The relationship you have with your father, it affects all your future relationships for the rest of your life, really… So after that, because of the start I had, people like Franco were like my father figures.” PR: I’m curious, did you know about shakespeare when you were a little girl in Argentina? Did you know about Romeo and Juliet? OH: “I didn’t know about Shakespeare, all

I knew was that I wanted to be an actress. I used to walk around the house with a towel around my head, pretending to be a nun, and my mother said ‘Oh god, what’s going on with my daughter?’ shakespeare magazine