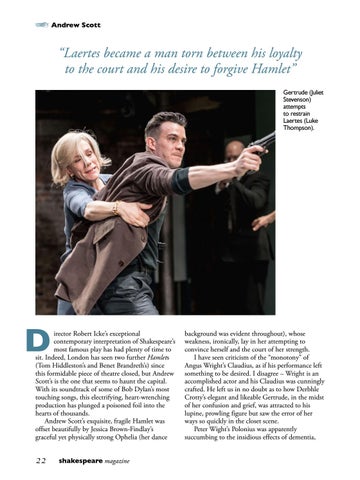 ! Andrew Scott “Laertes became a man torn between his loyalty to the court and his desire to forgive Hamlet” Gertrude (Juliet Stevenson) attempts to restrain Laertes (Luke Thompson).

irector Robert Icke’s exceptional contemporary interpretation of Shakespeare’s most famous play has had plenty of time to sit. Indeed, London has seen two further Hamlets (Tom Hiddleston’s and Benet Brandreth’s) since this formidable piece of theatre closed, but Andrew Scott’s is the one that seems to haunt the capital. With its soundtrack of some of Bob Dylan’s most touching songs, this electrifying, heart-wrenching production has plunged a poisoned foil into the hearts of thousands. Andrew Scott’s exquisite, fragile Hamlet was offset beautifully by Jessica Brown-Findlay’s graceful yet physically strong Ophelia (her dance

background was evident throughout), whose weakness, ironically, lay in her attempting to convince herself and the court of her strength. I have seen criticism of the “monotony” of Angus Wright’s Claudius, as if his performance left something to be desired. I disagree – Wright is an accomplished actor and his Claudius was cunningly crafted. He left us in no doubt as to how Derbhle Crotty’s elegant and likeable Gertrude, in the midst of her confusion and grief, was attracted to his lupine, prowling figure but saw the error of her ways so quickly in the closet scene. Peter Wight’s Polonius was apparently succumbing to the insidious effects of dementia,