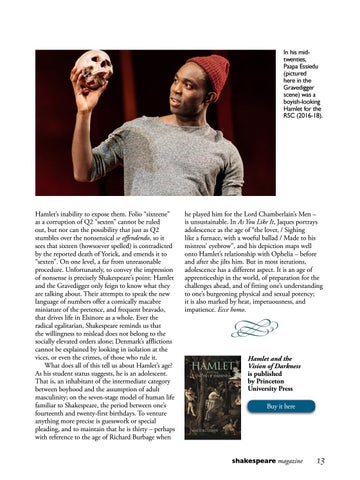 In his midtwenties, Paapa Essiedu (pictured here in the Gravedigger scene) was a boyish-looking Hamlet for the RSC (2016-18).

Hamlet’s inability to expose them. Folio “sixteene” as a corruption of Q2 “sexten” cannot be ruled out, but nor can the possibility that just as Q2 stumbles over the nonsensical se offendendo, so it sees that sixteen (howsoever spelled) is contradicted by the reported death of Yorick, and emends it to “sexten”. On one level, a far from unreasonable procedure. Unfortunately, to convey the impression of nonsense is precisely Shakespeare’s point: Hamlet and the Gravedigger only feign to know what they are talking about. Their attempts to speak the new language of numbers offer a comically macabre miniature of the pretence, and frequent bravado, that drives life in Elsinore as a whole. Ever the radical egalitarian, Shakespeare reminds us that the willingness to mislead does not belong to the socially elevated orders alone; Denmark’s afflictions cannot be explained by looking in isolation at the vices, or even the crimes, of those who rule it. What does all of this tell us about Hamlet’s age? As his student status suggests, he is an adolescent. That is, an inhabitant of the intermediate category between boyhood and the assumption of adult masculinity; on the seven-stage model of human life familiar to Shakespeare, the period between one’s fourteenth and twenty-first birthdays. To venture anything more precise is guesswork or special pleading, and to maintain that he is thirty – perhaps with reference to the age of Richard Burbage when

he played him for the Lord Chamberlain’s Men – is unsustainable. In As You Like It, Jaques portrays adolescence as the age of “the lover, / Sighing like a furnace, with a woeful ballad / Made to his mistress’ eyebrow”, and his depiction maps well onto Hamlet’s relationship with Ophelia – before and after she jilts him. But in most iterations, adolescence has a different aspect. It is an age of apprenticeship in the world, of preparation for the challenges ahead, and of fitting one’s understanding to one’s burgeoning physical and sexual potency; it is also marked by heat, impetuousness, and impatience. Ecce homo.