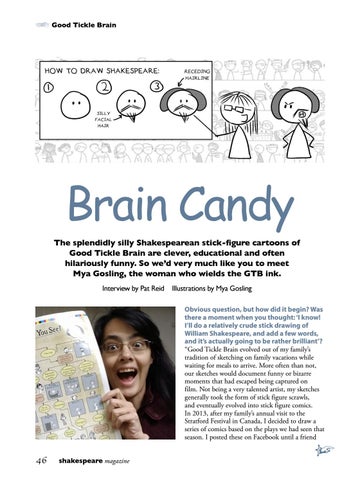 Illustrations by Mya Gosling Obvious question, but how did it begin? Was there a moment when you thought: ‘I know! I’ll do a relatively crude stick drawing of William Shakespeare, and add a few words, and it’s actually going to be rather brilliant’? “Good Tickle Brain evolved out of my family’s tradition of sketching on family vacations while waiting for meals to arrive. More often than not, our sketches would document funny or bizarre moments that had escaped being captured on film. Not being a very talented artist, my sketches generally took the form of stick figure scrawls, and eventually evolved into stick figure comics. In 2013, after my family’s annual visit to the Stratford Festival in Canada, I decided to draw a series of comics based on the plays we had seen that season. I posted these on Facebook until a friend