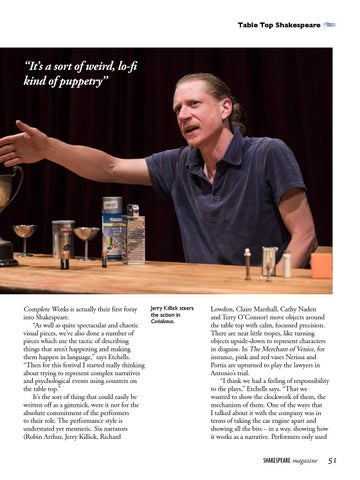 “It’s a sort of weird, lo-fi kind of puppetry”

Jerry Killick steers Complete Works is actually their first foray the action in into Shakespeare. Coriolanus. “As well as quite spectacular and chaotic visual pieces, we’ve also done a number of pieces which use the tactic of describing things that aren’t happening and making them happen in language,” says Etchells. “Then for this festival I started really thinking about trying to represent complex narratives and psychological events using counters on the table top.” It’s the sort of thing that could easily be written off as a gimmick, were it not for the absolute commitment of the performers to their role. The performance style is understated yet mesmeric. Six narrators (Robin Arthur, Jerry Killick, Richard

Lowdon, Claire Marshall, Cathy Naden and Terry O’Connor) move objects around the table top with calm, focussed precision. There are neat little tropes, like turning objects upside-down to represent characters in disguise. In The Merchant of Venice, for instance, pink and red vases Nerissa and Portia are upturned to play the lawyers in Antonio’s trial. “I think we had a feeling of responsibility to the plays,” Etchells says. “That we wanted to show the clockwork of them, the mechanism of them. One of the ways that I talked about it with the company was in terms of taking the car engine apart and showing all the bits – in a way, showing how it works as a narrative. Performers only used SHAKESPEARE magazine