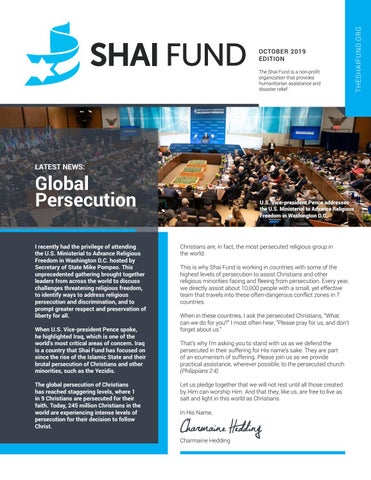 The Shai Fund is a non-profit organization that provides humanitarian assistance and disaster relief.

Global Persecution I recently had the privilege of attending the U.S. Ministerial to Advance Religious Freedom in Washington D.C. hosted by Secretary of State Mike Pompeo. This unprecedented gathering brought together leaders from across the world to discuss challenges threatening religious freedom, to identify ways to address religious persecution and discrimination, and to prompt greater respect and preservation of liberty for all. When U.S. Vice-president Pence spoke, he highlighted Iraq, which is one of the world’s most critical areas of concern. Iraq is a country that Shai Fund has focused on since the rise of the Islamic State and their brutal persecution of Christians and other minorities, such as the Yezidis. The global persecution of Christians has reached staggering levels, where 1 in 9 Christians are persecuted for their faith. Today, 245 million Christians in the world are experiencing intense levels of persecution for their decision to follow Christ.

Christians are, in fact, the most persecuted religious group in the world. This is why Shai Fund is working in countries with some of the highest levels of persecution to assist Christians and other religious minorities facing and fleeing from persecution. Every year, we directly assist about 10,000 people with a small, yet effective team that travels into these often-dangerous conflict zones in 7 countries. When in these countries, I ask the persecuted Christians, “What can we do for you?” I most often hear, “Please pray for us, and don’t forget about us.” That’s why I’m asking you to stand with us as we defend the persecuted in their suffering for His name’s sake. They are part of an ecumenism of suffering. Please join us as we provide practical assistance, wherever possible, to the persecuted church (Philippians 2:4). Let us pledge together that we will not rest until all those created by Him can worship Him. And that they, like us, are free to live as salt and light in this world as Christians. In His Name,

Thank you for helping children like Sara* in Iraq

Sara is the youngest daughter of one of the families in the Nineveh Plains, Iraq. Originally there were over 1.5 million Christians in Iraq and now this community has been reduced to less than 200 000. Many towns, homes and churches were destroyed by the Islamic State. And even those families whose houses have been restored are fearful about their future. Without jobs or major economic revitalization projects creating jobs, many Christians will be forced to leave their homeland forever.

Shai Fund has developed a unique project that combats poverty by restoring and restarting businesses as a means of transforming the economic situation in devastated towns and villages. It gives returning Christians the opportunity to work and earn a living, which is one of the most effective ways for them to rebuild their lives with dignity and purpose. It assists them as they resettle in their liberated cities by funding small and medium-sized businesses through specific grants. To date Shai Fund has launched 15 businesses and has over 36 businesses assessed and waiting for funding. The newly operating businesses include:

Because of your support, Sara’s family received help to restart their business in the Nineveh Plains. Her family can now feed her and send her to school. Thank you for your compassion and your support of families like Sara’s.

Egypt’s Christian community endures dangers that other Egyptians needn’t fear. Shai Fund’s goat farms and other small businesses assist Egyptian girls at risk. Egypt’s Christian community faces threats of violence during church services, attacks on buses filled with innocent pilgrims and children, and an epidemic of kidnapping, rape, beatings and torture of their women. To make matters worse, these crimes are common in villages outside major cities, where such abuses occur often with impunity. Women and girls are particularly defenseless and are abducted, assaulted and then blackmailed. Meanwhile, local communities are unwilling to get involved, so the victims receive little or no help. Thanks to your support, Shai Fund was able to run workshops with 200 women and girls to teach them about their Biblical identity and to introduce prevention programs to stop abuse and heal trauma. Often times poverty increases defenseless females’ vulnerability to dangerous situations. To help combat this, we’ve also started 25 small businesses with these women and girls. Some have received goats to raise and breed, while others started bakeries, sheet-making businesses and kiosk shops. These projects work in close cooperation with local churches and faithbased community organizations to mobilize support, meanwhile encouraging changes in traditional cultural thinking, which can lead to rejection of survivors.

Find out how The Shai Fund is making a difference for persecuted people around the world. Our latest edition newsletter will give you up to date information about current projects and the global community being impacted by Shai Fund assistance. 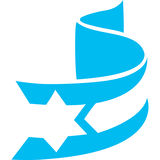