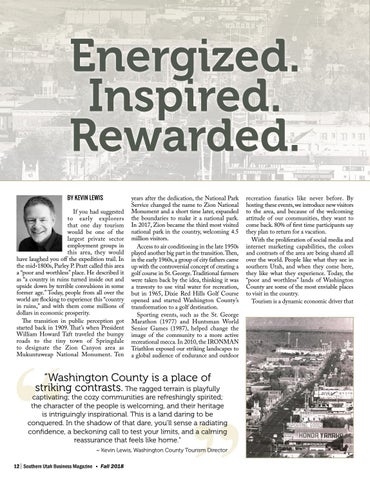 If you had suggested to early explorers that one day tourism would be one of the largest private sector employment groups in this area, they would have laughed you off the expedition trail. In the mid-1800s, Parley P. Pratt called this area a “poor and worthless” place. He described it as “a country in ruins turned inside out and upside down by terrible convulsions in some former age.” Today, people from all over the world are flocking to experience this “country in ruins,” and with them come millions of dollars in economic prosperity. The transition in public perception got started back in 1909. That’s when President William Howard Taft traveled the bumpy roads to the tiny town of Springdale to designate the Zion Canyon area as Mukuntuweap National Monument. Ten

years after the dedication, the National Park Service changed the name to Zion National Monument and a short time later, expanded the boundaries to make it a national park. In 2017, Zion became the third most visited national park in the country, welcoming 4.5 million visitors. Access to air conditioning in the late 1950s played another big part in the transition. Then, in the early 1960s, a group of city fathers came up with the controversial concept of creating a golf course in St. George. Traditional farmers were taken back by the idea, thinking it was a travesty to use vital water for recreation, but in 1965, Dixie Red Hills Golf Course opened and started Washington County’s transformation to a golf destination. Sporting events, such as the St. George Marathon (1977) and Huntsman World Senior Games (1987), helped change the image of the community to a more active recreational mecca. In 2010, the IRONMAN Triathlon exposed our striking landscapes to a global audience of endurance and outdoor

“Washington County is a place of striking contrasts. The ragged terrain is playfully

captivating; the cozy communities are refreshingly spirited; the character of the people is welcoming, and their heritage is intriguingly inspirational. This is a land daring to be conquered. In the shadow of that dare, you’ll sense a radiating confidence, a beckoning call to test your limits, and a calming reassurance that feels like home.” – Kevin Lewis, Washington County Tourism Director 12 Southern Utah Business Magazine

recreation fanatics like never before. By hosting these events, we introduce new visitors to the area, and because of the welcoming attitude of our communities, they want to come back. 80% of first time participants say they plan to return for a vacation. With the proliferation of social media and internet marketing capabilities, the colors and contrasts of the area are being shared all over the world. People like what they see in southern Utah, and when they come here, they like what they experience. Today, the “poor and worthless” lands of Washington County are some of the most enviable places to visit in the country. Tourism is a dynamic economic driver that