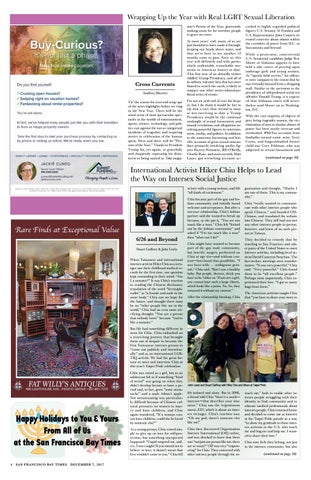 Wrapping Up the Year with Real LGBT Sexual Liberation zine’s Person of the Year, generously making room for far worthier people to grace its cover.

At most years’ end, many of us are just thankful to have made it through, keeping our heads above water, and that we’re here to see another 12 months come to pass. Even so, this year will definitely end with particularly undeniable remarkable moments in American history to date. This first year of an absurdly twitter riddled Trump Presidency, and all of its sulfuric volcanic lava that has since flowed to scorch the earth, is likely to outpace any other socio-cultural-political series of events.

Tis’ the season for year-end wrap ups of the news highlights before we ring in the New Year. There will be the usual array of most spectacular spectacles in the worlds of entertainment, sports, science, technology, and politics cast against the not so categorical incidents of tragedies and inspiring stories in celebration of the human spirit. Here and there will be “Persons of the Year.” Thanks to President Trump for, yet again, so gracefully and eloquently expressing his disinterest in being named as Time maga-

I’m not an avid end of year list keeper, but I do think it would be fair to say that a very close second to more or less surviving to date a Trump Presidency would be the continual onslaught of sexual harassment and assault revelations and allegations involving powerful figures in entertainment, media, and politics. In addition to the numerous harrowing and horrific accounts of gross sexual misconduct primarily involving media figures Harvey Weinstein, Bill O’Reilly, Charlie Rose, and most recently Matt Lauer, gut wrenching accounts ac-

corded to highly regarded political figures U.S. Senator Al Franken and U.S. Representative John Conyers elevated concerns about abuses within the corridors of power from D.C. to Sacramento and beyond. While a prosecutor, controversial U.S. Senatorial candidate Judge Roy Moore of Alabama appears to have held a side career of preying upon underage girls and young women. As “openly held secrets,” his offenses were rampant to the extent that he was virtually banned from a shopping mall. Similar to the ascension to the presidency of self-professed serial sex offender Donald Trump, it is expected that Alabama voters will nevertheless send Moore on to Washington, D.C. With the vast majority of objects of prey being cisgender women, the victimization of men to similar abuses of power has been nearly overcast and overlooked. #MeToo accounts from footballer turned comic actor Terry Crews, and long-embattled former child star Cory Feldman, who was subjected to sexual harassment and (continued on page 30)

International Activist Hiker Chiu Helps to Lead the Way on Intersex Social Justice in love with a young woman, and felt “all kinds of excitement.”

6/26 and Beyond Stuart Gaffney & John Lewis When Taiwanese and international intersex activist Hiker Chiu as a teenager saw their childhood medical records for the first time, one question kept resounding in their mind: “Am I a monster?” It was Chiu’s reaction to reading the Chinese dictionary translation of the word “hermaphrodite” as “a female and male in the same body.” Chiu saw no hope for the future, and thought there must be no “other people like me in the world.” Chiu had an even more terrifying thought: “You are a person that nobody loves” because “you’re like a monster.”

Chiu became part of the gay and lesbian community and initially found welcome and acceptance. But after a ten-year relationship, Chiu’s lesbian partner said she wanted to break up because, as she put it, “You are too much like a man.” Chiu felt “kicked out by the lesbian community” and asked if “I’m too much like a man” then “what can I do?” Chiu might have wanted to become part of the gay male community, but horrific surgery performed on Chiu at age six—and without consent—foreclosed that possibility. “I was born with … ambiguous genitals,” Chiu said. “But I was a healthy baby. But people, doctors, think you have to be ‘either or.’ If you are a girl, you cannot have such a large clitoris, which looks like a penis. No. So, they removed it without my consent.” After the relationship breakup, Chiu

ganization and thought, “Maybe I am one of them. This is my community.” Chiu “really wanted to communicate with other intersex people who speak Chinese,” and founded OIIChinese, and translated the website into Chinese. They still had not met any other intersex people in person, however, and knew of no such person in Taiwan. They decided to remedy that by traveling to San Francisco and other parts of the United States to meet intersex activists, including local activist David Cameron Strachan. The face-to-face meetings were transformative. “It was very powerful,” Chiu said. “Very powerful.” Chiu found them to be “all excellent people.” Perhaps most importantly, Chiu experienced their love. “I got so many hugs from them.” The American activists taught Chiu that “you have to share your story to

But life had something different in store for Chiu. Chiu embarked on a years-long journey that brought them out of despair to become the first Taiwanese intersex person to “come out publicly and intentionally” and as an international LGBTIQ activist. We had the great fortune to meet and interview Chiu at this year’s Taipei Pride celebration.

Chiu was raised as a girl, but as an adolescent felt as if something “kind of weird” was going on when they didn’t develop breasts or have a period and, in fact, grew “some moustache” and a male Adam’s apple. Not menstruating was particularly difficult because of Chinese cultural pressures on women to marry and have children, and Chiu again wondered, “If a woman cannot have children, could she be loved by someone else?”

felt isolated and alone. But in 2008, a friend told Chiu “there’s a word— intersex—that describes your situation.” Chiu saw the Argentinean movie XXY, which is about an intersex teenager. Chiu’s reaction was: “Oh my god, there’s someone else like me!”

As a young person, Chiu vowed simply to give up on love for self-protection, but something unexpected happened. “Cupid targeted me, and, yes, I was caught! If you intend not to believe in love, it doesn’t mean that love wouldn’t come to you.” Chiu fell

Chiu then discovered Organization Intersex International (OII) online, and was shocked to learn that there was “not just one person like me; there are so many!” OII was very “empowering” for Chiu. They conversed with other intersex people through the or-

reach out,” both to enable other intersex people struggling with their identity to find community and to educate medical professionals about intersex people. Chiu returned home and decided to come out as intersex at the Taipei Pride parade as a way “to show my gratitude to those intersex activists in the U.S. who teach me and hug me and help me. I wanted to share their love.” Chiu now feels they belong, not just to the intersex community, but also (continued on page 30)

The San Francisco Bay Times is the oldest and largest LGBT newspaper in San Francisco that is now - and always has been - 100% LGBT funded a...

The San Francisco Bay Times is the oldest and largest LGBT newspaper in San Francisco that is now - and always has been - 100% LGBT funded a...