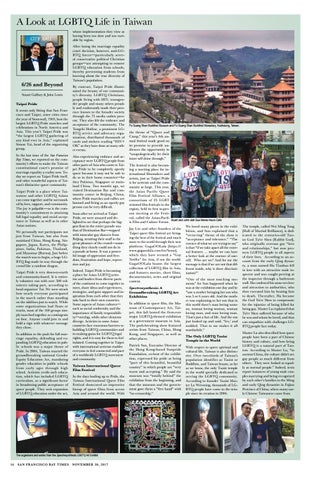 A Look at LGBTQ Life in Taiwan whose implementation they view as having been too slow and too variable by region.

6/26 and Beyond Stuart Gaffney & John Lewis Taipei Pride It seems only fitting that San Francisco and Taipei, sister cities since the year of Stonewall, 1969, host the largest LGBTQ Pride marches and celebrations in North America and Asia. This year’s Taipei Pride was “the largest LGBTQ gathering of any kind ever in Asia,” explained Simon Tai, head of the organizing group. In the last issue of the San Francisco Bay Times, we reported on the community’s efforts to make the Taiwan constitutional court’s promise of marriage equality a reality now. Today we report on Taipei Pride itself, and other wonderful aspects of Taiwan’s distinctive queer community. Taipei Pride is a place where Taiwanese and other LGBTQ Asians can come together and be surrounded by love, support, and community. The joy is palpable—as is the community’s commitment to attaining full legal equality and social acceptance in Taiwan as well as in other Asian nations. We personally met participants not just from Taiwan, but also from mainland China, Hong Kong, Singapore, Japan, Korea, the Philippines, India, Pakistan, Thailand, and Myanmar (Burma). Just before the march was to begin, a huge LGBTQ flag made its way through the crowd like a rainbow dragon. Taipei Pride is very down-to-earth and community-based. It is entirely volunteer run with over 500 volunteers taking part, according to head organizer Tai. We were struck how nearly everyone participated in the march rather than standing on the sidelines just to watch. While some organizations had f loats or trucks, most of the 160 groups simply marched together as contingents on foot. Anyone could join in and hold a sign with whatever message they chose. In addition to the push for full marriage equality, defending and expanding LGBTQ education in public schools was a major theme of Pride. In 2004, Taiwan enacted the groundbreaking national Gender Equity Education Act, mandating gender education in public schools from early ages t hrough h igh school. Activists credit such education, which has included LGBTQ curriculum, as a significant factor in broadening public acceptance of queer people. They seek expansion of LGBTQ education under the act,

After losing the marriage equality court decision, however, anti-LGBTQ forces—particularly several conservative political Christian groups—are attempting to remove LGBTQ education from schools, thereby preventing students from learning about the true diversity of Taiwan’s population. By contrast, Taipei Pride illuminated the beauty of our community’s diversity. LGBTQ Christians, people living with HIV, transgender people and many others proudly and exuberantly made their presence known to the broader society through the 75 media outlets present. They also felt the embrace and acceptance of the community. The Tongzhi Hotline, a prominent LGBTQ service and advocacy organization, distributed thousands of cards and stickers reading “HIV+ OK” as they have done at many other events. Also experiencing embrace and acceptance were LGBTQ people from other parts of Asia who came to Taipei Pride to be completely openly queer because it may not be safe to do so in their home countries—be they Pakistan, Singapore or mainland China. Two months ago, we visited Destination Bar and community center in Beijing, China, where Pride marches and rallies are banned and living as an openly gay person can be very difficult. Soon after we arrived at Taipei Pride, we were amazed and delighted to see that perhaps the biggest float in the entire parade was that of Destination Bar—topped with muscular gay dancers from Beijing, strutting their stuff to the great pleasure of the crowd—something they clearly could not do in a parade at home. It was a powerful image of oppression and freedom, frustration and hope, repression and joy. Indeed, Taipei Pride is becoming a place for Asian LGBTQ activists and leaders from diverse parts of the continent to come together to meet, share ideas and experiences, strategize, and gain support and inspiration from each other that they take back to their own countries. Some aspects of Asian cultures— such as social conformity and the importance of family responsibility—overlap, while other elements diverge. Activists in some Asian countries face enormous barriers to building LGBTQ communities and to making gains for LGBTQ legal rights, and it is easy for them to feel isolated. Coming together in Taipei with international activists enables everyone to feel connected and part of a worldwide LGBTQ movement and community Taiwan International Queer Film Festival In the days leading up to Pride, the Taiwan International Queer Film Festival showcased an impressive lineup of queer films from across Asia and around the world. With

The organizers and works from the Spectrosynthesis LGBTQ Art Exhibit 16

the theme of “Queer and Camp,” this year’s 4th annual festival made good on its promise to provide audiences the opportunity to “unapologetically let their inner self shine through.” The festival is also becoming a meeting place for international filmmakers and artists, just as Taipei Pride is for activists and the community at large. This year, the Asian Pacif ic Queer Film Festival Alliance, a consortium of 25 LGBT oriented film festivals in the region, held its first in-person meeting at the Festival, called the Asian-PacifStuart and John visit Guo Mama Hours Cafe ic Film and Culture Forum. We loved many pieces in the exhiJay Lin and other founders of the bition, and Sun explained that a Taipei queer film festival are bring“recurring” theme of the show is ing the best of the festival and much “acceptance and tolerance.” “The more to the world through their new essence of what we are trying to say” platform: GagaOOLala (https:// is that “if we take apart all the exterwww.gagaoolala.com/en/home), nal features … maybe we can have which they have termed a “Gay a better look at the essence of oneNetflix” for Asia, if not the world. self. Who are we? And for me the GagaOOLala boasts the largest message is that if we are not that difcollection of LGBTQ film in Asia, ferent inside, why is there discrimiand features movies, short f ilms, nation?” documentaries, series and original “One of the most touching mocontent. ments” for Sun happened when he was at the exhibition one day and he Spectrosynthesis: A “saw a mother bringing her son who Groundbreaking LGBTQ Art was 5 or 6 years old. And the mothExhibition er was explaining to her son that in In addition to queer film, the Mu- this world there’s man loving womseum of Contemporary Art, Tai- an, woman loving woman, woman pei, this fall hosted the f irst-ever loving man, and man loving man. major LGBTQ-themed exhibition That’s just a fact of life. And the son at a government museum in Asia. just looked up and said, ‘Yes,’ and The path-breaking show featured nodded. That to me makes it all artists from Taiwan, China, Hong worthwhile.” Kong, and Singapore, as well as The Only LGBTQ Taoist other places. Temple in the World Patrick Sun, Executive Director of With respect to queer spiritual and the Hong Kong-based Sunpride cultural life, Taiwan is also distincFoundation, co-host of the exhibi- tive. Over two-thirds of Taiwan’s tion, expressed his pride at being population identifies as Taoist or “part of this beautiful, beautiful Buddhist, and Taiwan boasts, as far country” in which people are “very as we know, the only Taoist temple warm and accepting.” He said the in the world specially dedicated to museum was “totally behind” the serving the LGBTQ community. exhibition from the beginning, and According to founder Taoist Masthat the museum and the govern- ter Lu Wei-ming, thousands of LGment gave them a “free hand” with BTQ people have come to the tem“no censorship.” ple since its creation in 2006.

The temple, called Wei Ming Tong (Hall of Martial Brilliance), is dedicated to the centuries-old Taoist God Tu‘er Shen (Rabbit God), who originally oversaw gay “love and relationships,” but now protects LGBTQ people in all aspects of their lives. According to an account from the early Qing dynasty, a man named Hu Tianbao fell in love with an attractive male inspector and was caught peering at the inspector through a bathroom wall. Hu confessed his same-sex love and attraction to authorities, who then executed him by beating him to death. Thereafter, Hu became the God Tu’er Shen to compensate for the injustice of being killed for being gay. Master Lu explained that Tu’er Shen suffered because of who he was and whom he loved, and thus can empathize with challenges LGBTQ people face today. Master Lu also described how queer people have been a part of Chinese history and culture, and how being LGBTQ is a natural part of Taoism. According to Master Lu, “in ancient China, the culture didn’t see gay people as much different from others. They were looked at equally as normal people.” Indeed, texts report instances of young male couples marrying and being recognized by each other’s families in the Ming and early Qing dynasties in Fujian Province of China, where many early Chinese Taiwanese came from.

The San Francisco Bay Times is the largest and oldest LGBT newspaper in San Francisco that is now - and always has been - 100% LGBT funded a...

The San Francisco Bay Times is the largest and oldest LGBT newspaper in San Francisco that is now - and always has been - 100% LGBT funded a...