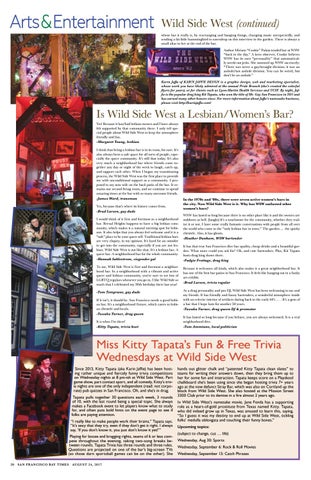 Wild Side West (continued) whose bar it really is, by rearranging and banging things, changing music unexpectedly, and sending a fat little hummingbird to eavesdrop on this interview in the garden. There is always a small altar to her at the end of the bar. Author Miriam “Cookie” Palaia tended bar at WSW “back in the day.” A keen observer, Cookie believes WSW has its own “personality” that automatically weeds out jerks. She summed up WSW succinctly: “There was never a gay/straight division; it was an asshole/not asshole division. You can be weird, but don’t be an asshole.” Karin Jaffie of KAR!N JAFF!E DES!GN is a graphic design, web and marketing specialist, whose work you have likely admired at the annual Pride Brunch (she’s created the colorful flyers for years), or for clients such as Lyon-Martin Health Services and UCSF. By night, Jaffie is the popular drag king Kit Tapata, who won the title of Mr. Gay San Francisco in 2011 and has earned many other honors since. For more information about Jaffie’s namesake business, please visit http://karinjaffie.com/

Is Wild Side West a Lesbian/Women’s Bar? Yes! Because it has/had lesbian owners and I have always felt supported by that community there. I only tell special people about Wild Side West to keep the atmosphere friendly and fun. -Margaret Young, lesbian I think that being a lesbian bar is in its roots, for sure. It’s also always been a safe space for all sorts of people, especially the queer community. It’s still that today. It’s also very much a neighborhood bar where friends come together any day or night of the week to laugh, catch up, and support each other. When I began my transitioning process, the Wild Side West was the first place to provide me with unconditional support as a community. I proposed to my now wife on the back patio of the bar. It remains our second living room, and we continue to spend amazing times at the bar with so many awesome friends. -James Ward, transman Yes, because that’s where its history comes from. -Brad Larsen, gay dude I would think of it first and foremost as a neighborhood bar. Bernal Heights happens to have a big lesbian community, which makes it a natural meeting spot for lesbians. It also helps that you always feel welcome and it is a “safe” place to be your queer self. Traditional lesbian bars are very cliquey, in my opinion. It’s hard for an outsider to get into the community, especially if you are not lesbian. Wild Side West is not like that. It’s a lesbian bar. A queer bar. A neighborhood bar for the whole community. -Hannah Sablestrom, cisgender gal

In the 1970s and ‘80s, there were seven active women’s bars in the city. Now Wild Side West is it. Why has WSW outlasted other women’s bars? WSW has lasted so long because there is no other place like it and the owners are stubborn as hell. (laughs) It’s a touchstone for the community, whether they realize it or not. I have some really fantastic conversations with people from all over the world who come to the “only lesbian bar in town.” The garden ... the quirky clientele. Also, it has ghosts. -Heather Dunham, WSW bartender It has that true San Francisco dive bar quality, cheap drinks and a beautiful garden. What more could you ask for? Oh, and cute bartenders. Plus, Kit Tapata hosts drag king shows there. -Fudgie Frottage, drag king

To me, Wild Side West is first and foremost a neighborhood bar. In a neighborhood with a vibrant and active queer and lesbian community, you’re sure to see lots of LGBTQ regulars whenever you go in. I like Wild Side so much that I celebrated my 30th birthday there last year!

Because it welcomes all kinds, which also makes it a great neighborhood bar. It has one of the best bar patios in San Francisco. It feels like hanging out in a funky art exhibit. -Brad Larsen, trivia regular

As a drag personality and pro DJ, Wild Side West has been welcoming to me and my friends. It has friendly and funny bartenders, a wonderful atmosphere inside with an eclectic interior of artifacts dating back to the early 60’s … . It’s a gem of a bar that I hope lasts for another 50 years. -Tweaka Turner, drag queen DJ &amp; promoter

If it isn’t, it should be. San Francisco needs a good lesbian bar. It’s a neighborhood fixture, which caters to lesbian clientele and locals. -Tweaka Turner, drag queen It is when I’m there! -Kitty Tapata, trivia host

It has lasted so long because if you behave, you are always welcomed. It is a real neighborhood dive. -Tom Ammiano, local politician

Miss Kitty Tapata’s Fun &amp; Free Trivia Wednesdays at Wild Side West Since 2013, Kitty Tapata (aka Karin Jaffie) has been hosting rather unique and fiercely funny trivia competitions on Wednesday nights at 8 pm-ish at Wild Side West. Part game show, part contact sport, and all comedy, Kitty’s trivia nights are one of the only independent (read: not corporate) pub quizzes in San Francisco. Oh, and she’s in drag. Tapata pulls together 30 questions each week, 3 rounds of 10, with the last round being a special topic. She always makes a Facebook event to let players know what to study for, and often puts bold hints on the event page to see if folks are paying attention. “I really like to make people work their brains,” Tapata says. “It’s sexy that they try, even if they don’t get it right. I always say, ‘If you don’t know it, you just don’t know it yet!’” Playing for booze and bragging rights, teams of 6 or less compete throughout the evening, taking two-song breaks between rounds. Tapata Trivia has three rounds and three rules. Questions are projected on one of the bar’s big-screen TVs (so those darn sportsball games can be on the other). She 20

hands out glitter chalk and “patented Kitty Tapata clean slates” to teams for writing their answers down, then they bring them up to her for some fun and interaction. Tapata keeps score on a Playskool chalkboard she’s been using since she began hosting trivia 7+ years ago at the now defunct Stray Bar, which was also on Cortland up the block from Wild Side West. She also hosted at the Mission Street 3300 Club prior to its demise in a fire almost 2 years ago. In Wild Side West’s namesake movie, Jane Fonda has a supporting role as a heart-of-gold prostitute from Texas named Kitty. Tapata, who did indeed grow up in Texas, was amused to learn this, saying, “So I guess it was my destiny to end up at Wild Side West, tickling folks’ medulla oblongata and touching their funny bones.” Upcoming topics: (subject to change, cuz … life) Wednesday, Aug 30: Sports Wednesday, September 6: Rock &amp; Roll Movies Wednesday, September 13: Catch Phrases

The San Francisco Bay Times is the largest and oldest LGBT newspaper in San Francisco that is now - and always has been - 100% LGBT funded and owned. In 1978, the SF Bay Times became the first newspaper in Northern California and perhaps the world to be created jointly and equally by gay men and lesbians working together. We are proud of our legacy in fostering unity in our community.