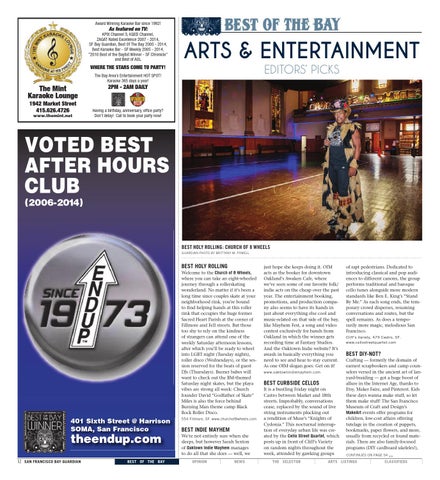 As featured on TV:

Where The STarS coMe To parTy!

BEST HOLY ROLLING Welcome to the Church of 8 Wheels, where you can take an eight-wheeled journey through a rollerskating wonderland. No matter if it’s been a long time since couples skate at your neighborhood rink, you’re bound to find helping hands at this roller rink that occupies the huge former Sacred Heart Parish at the corner of Fillmore and Fell streets. But those too shy to rely on the kindness of strangers can attend one of the weekly Saturday afternoon lessons, after which you’ll be ready to wheel into LGBT night (Tuesday nights), roller disco (Wednesdays), or the session reserved for the beats of guest DJs (Thursdays). Burner babes will want to check out the BM-themed Saturday night skates, but the playa vibes are strong all week: Church founder David “Godfather of Skate” Miles is also the force behind Burning Man theme camp Black Rock Roller Disco.

beSt OF tHe bAY

BEST INDIE MAYHEM We’re not entirely sure when she sleeps, but however Sarah Sexton of Oaktown Indie Mayhem manages to do all that she does — well, we OPINION

just hope she keeps doing it. OIM acts as the booker for downtown Oakland’s Awaken Cafe, where we’ve seen some of our favorite folk/ indie acts on the cheap over the past year. The entertainment booking, promotions, and production company also seems to have its hands in just about everything else cool and music-related on that side of the bay, like Mayhem Fest, a song and video contest exclusively for bands from Oakland in which the winner gets recording time at Fantasy Studios. And the Oaktown Indie website? It’s awash in basically everything you need to see and hear to stay current. As one OIM slogan goes: Get on it! www.oaktownindiemayhem.com

BEST CURBSIDE CELLOS It is a bustling Friday night on Castro between Market and 18th streets. Improbably, conversations cease, replaced by the sound of live string instruments plucking out a rendition of Muse’s “Knights of Cydonia.” This nocturnal interruption of everyday urban life was created by the Cello Street Quartet, which posts up in front of Cliff’s Variety on random nights throughout the week, attended by gawking groups tHe SeLectOr

of rapt pedestrians. Dedicated to introducing classical and pop audiences to different canons, the group performs traditional and baroque cello tunes alongside more modern standards like Ben E. King’s “Stand By Me.” As each song ends, the temporary crowd disperses, resuming conversations and routes, but the spell remains. As does a temporarily more magic, melodious San Francisco. Cliff’s Variety, 479 Castro, SF. www.cellostreetquartet.com

BEST DIY-NOT? Crafting — formerly the domain of earnest scrapbookers and camp counselors versed in the ancient art of lanyard-braiding — got a huge boost of allure in the Internet Age, thanks to Etsy, Maker Faire, and Pinterest. Kids these days wanna make stuff, so let them make stuff! The San Francisco Museum of Craft and Design’s MakeArt events offer programs for children, low-cost affairs offering tutelage in the creation of puppets, bookmarks, paper flowers, and more, usually from recycled or found materials. There are also family-focused programs (DIY cardboard ukeleles!), CONTINUES ON PAGE 54 >> 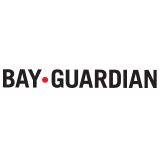