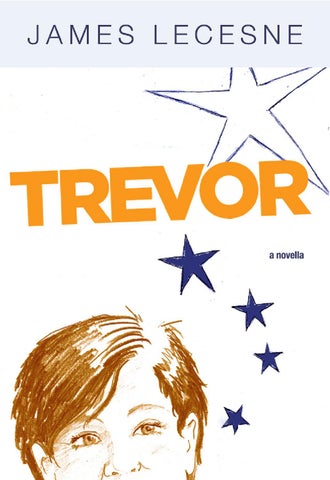 Text and Illustrations by

This book is dedicated to the memory of Randy Stone cofounder of The Trevor Project.

here I was lying on the front lawn in plain sight

with a knife in my back. Actually that was the effect I was going for, and to be perfectly honest, I think it looked pretty good—from the street. I had gone to a lot of trouble in order to create the illusion that I’d been murdered. First, I borrowed Mom’s kitchen knife (the big one) and planted it firmly in the dirt. Then I positioned my body so that it looked to the people who happened to be driving by in their cars that I’d been stabbed to death. The fact that Dad was nonchalantly mowing the lawn made the whole thing seem (in my opinion) even more macabre. Imagine that you are driving past a typical suburban house on a typical suburban street in a typical suburban town somewhere in America at the beginning of the 21st Century. A guy is mowing his lawn. You happen to turn your head and catch sight of this kid—thirteen-years-old, brown hair, wearing 9

a t-shirt, jeans and running shoes. He’s lying on the grass with a knife stuck in his back. Horrors! What do you do? Do you turn your head away and pretend you didn’t see it? Call 911? Stop and point out to the guy who is mowing the lawn that his kid appears to be dead. Do you stop the car, jump out and administer mouth-to-mouth resuscitation? What? These are a few of the questions I was pondering while lying there attempting to stop my breathing by making my stomach move not at all. It’s hard to do, but I had been practicing this for years and eventually I developed a technique to simulate deadness. I can fool trained paramedics, which I did once when I was in seventh grade (the trained paramedic was my cousin Sara, but still). Anyway, I was doing a pretty good job of being a murder victim, when I heard my Dad yell over the sound of the mower. “WHAT?” “MY KITCHEN KNIFE,” Mom yelled back from the porch where she was standing. “HAVE YOU SEEN IT? THE BIG ONE?” Dad did not reply, but I imagine that by this time Mom had spotted me lying there in plain sight along with her knife. I opened one eye just enough to see her marching across the front lawn. She was coming toward me, and she did not look happy. I’d say, based on her facial expression and body language, exasperation would be a more fitting

description of her mental state. The fact that she was wearing an apron made me deduce that she had been in the middle of cooking dinner and then realized that her knife (the big one) was missing. After looking high and low, the logical next step would have been to ask Dad if heâ&amp;#x20AC;&amp;#x2122;d taken it from the kitchen. He is always using her kitchen utensils for inappropriate household activities like cutting tree branches or unscrewing something on his car. Once she

spotted me, I figured that I’d be receiving a good talking to, so I shut my eyes and braced myself for her verbal onslaught. Let me just say that Mom is not my best audience. Ever. She has always been very busy with either housework or her job. As she often reminds me, she doesn’t have the time or the energy for my “shenanigans” and she wishes to God that I would find something constructive to do with my time, something other than sitting in my room doodling for hours or lying on the front lawn pretending to be dead. What about baseball, she has asked me on more than one occasion. “Would it kill you to go over and ask that gang of boys if they needed an extra outfielder or something? She didn’t understand that in fact I was being constructive. I had gone to a lot of trouble in order to create the effect of my own murder on the front lawn, but unfortunately, due to her position, it was lost on her. I was really doing it for the benefit of the random people who were passing by our house. From the other angle, it must have looked as though I’d fallen asleep on the front lawn with the knife stuck in the grass beside me. I doubt she would have enjoyed having the whole thing explained to her, so I kept my mouth shut and kept on pretending to be dead. Knowing Mom, she probably was able to figure out what I was up to and just wasn’t that impressed. In any case, she reached down and quickly snatched the knife from the lawn. Then she wheeled herself around and

headed back toward the house without a word. She didn’t even bother to yell at me. Maybe she thought I was doing this as a ploy to get attention, but I was just trying to keep myself entertained. It’s fun to be pretend-dead and then lie there as the world goes on without you. In my opinion, this is a much better use of my time than playing baseball. The mower started up again, but I could hear Dad’s voice shouting over the sound of the revving motor. “TREVOR,” he yelled. “GET UP. I HAVE TO FINISH THE LAWN AND YOU’RE IN THE WAY . . . TREVOR!”

Apparently, he had read all about this and according to the Internet, it was something they told to young boys in order to get them to stop abusing themselves. “I am no expert,” I told Zac. “But I’ve never heard of a single case where someone went deaf due to of masturbation…What’d you say?!” Zac asked, pretending to be deaf. We had big laugh over that one. Then things got ugly. He asked me if I was planning to dress up for Halloween, and I told him that I was considering going as Lady Gaga. “Why?” he asked, and I could tell that he disapproved of my idea. I explained to him that Lady Gaga was (a) my absolute fave, (b) an icon, and (c) an original who knew how to

bath in the pose of poor old Marat, and then maybe be discovered as the youngest artist of my generation. I got a hold of my motherâ&amp;#x20AC;&amp;#x2122;s terry-cloth shower turban. I found an old quill pen, which I had purchased years ago when I went to Philadelphia on a school trip to view the actual Declaration of Independence. And I bought a packet of fake blood from the Halloween section of the local card shop. I was all set and super excited. After applying the

A poignant young adult novella of love, loss, and Lady Gaga, for anyone who has been shunned for being different. Advance reading copy.