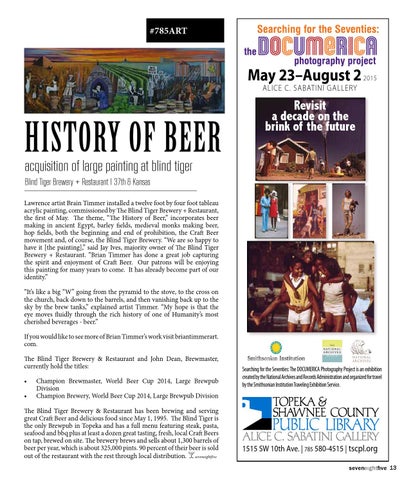 Revisit a decade on the brink of the future

Lawrence artist Brain Timmer installed a twelve foot by four foot tableau acrylic painting, commissioned by The Blind Tiger Brewery + Restaurant, the first of May. The theme, “The History of Beer,” incorporates beer making in ancient Egypt, barley fields, medieval monks making beer, hop fields, both the beginning and end of prohibition, the Craft Beer movement and, of course, the Blind Tiger Brewery. “We are so happy to have it [the painting],” said Jay Ives, majority owner of The Blind Tiger Brewery + Restaurant. “Brian Timmer has done a great job capturing the spirit and enjoyment of Craft Beer. Our patrons will be enjoying this painting for many years to come. It has already become part of our identity.” “It’s like a big “W” going from the pyramid to the stove, to the cross on the church, back down to the barrels, and then vanishing back up to the sky by the brew tanks,” explained artist Timmer. “My hope is that the eye moves fluidly through the rich history of one of Humanity’s most cherished beverages - beer.” If you would like to see more of Brian Timmer’s work visit briantimmerart. com. The Blind Tiger Brewery &amp; Restaurant and John Dean, Brewmaster, currently hold the titles: • •

The Blind Tiger Brewery &amp; Restaurant has been brewing and serving great Craft Beer and delicious food since May 1, 1995. The Blind Tiger is the only Brewpub in Topeka and has a full menu featuring steak, pasta, seafood and bbq plus at least a dozen great tasting, fresh, local Craft Beers on tap, brewed on site. The brewery brews and sells about 1,300 barrels of beer per year, which is about 325,000 pints. 90 percent of their beer is sold out of the restaurant with the rest through local distribution. aseveneightfive

Searching for the Seventies: The DOCUMERICA Photography Project is an exhibition created by the National Archives and Records Administration and organized for travel by the Smithsonian Institution Traveling Exhibition Service. 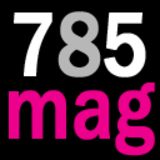