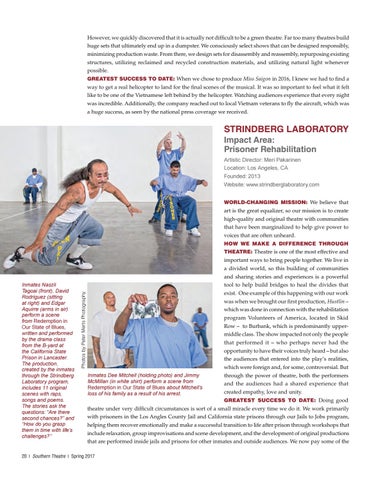 However, we quickly discovered that it is actually not difficult to be a green theatre. Far too many theatres build huge sets that ultimately end up in a dumpster. We consciously select shows that can be designed responsibly, minimizing production waste. From there, we design sets for disassembly and reassembly, repurposing existing structures, utilizing reclaimed and recycled construction materials, and utilizing natural light whenever possible. GREATEST SUCCESS TO DATE: When we chose to produce Miss Saigon in 2016, I knew we had to find a

way to get a real helicopter to land for the final scenes of the musical. It was so important to feel what it felt like to be one of the Vietnamese left behind by the helicopter. Watching audiences experience that every night was incredible. Additionally, the company reached out to local Vietnam veterans to fly the aircraft, which was a huge success, as seen by the national press coverage we received.

art is the great equalizer, so our mission is to create high-quality and original theatre with communities that have been marginalized to help give power to voices that are often unheard. HOW WE MAKE A DIFFERENCE THROUGH THEATRE: Theatre is one of the most effective and

important ways to bring people together. We live in a divided world, so this building of communities and sharing stories and experiences is a powerful tool to help build bridges to heal the divides that exist. One example of this happening with our work

Inmates Naszli Tagoai (front), David Rodriguez (sitting at right) and Edgar Aquirre (arms in air) perform a scene from Redemption in Our State of Blues, written and performed by the drama class from the B-yard at the California State Prison in Lancaster. The production, created by the inmates through the Strindberg Laboratory program, includes 11 original scenes with raps, songs and poems. The stories ask the questions: “Are there second chances?” and “How do you grasp them in time with life’s challenges?’’

was when we brought our first production, Hustlin – which was done in connection with the rehabilitation program Volunteers of America, located in Skid Row – to Burbank, which is predominantly uppermiddle class. The show impacted not only the people that performed it – who perhaps never had the opportunity to have their voices truly heard – but also the audiences that entered into the play’s realities, which were foreign and, for some, controversial. But Inmates Dee Mitchell (holding photo) and Jimmy McMillan (in white shirt) perform a scene from Redemption in Our State of Blues about Mitchell’s loss of his family as a result of his arrest.

through the power of theatre, both the performers and the audiences had a shared experience that created empathy, love and unity. GREATEST SUCCESS TO DATE: Doing good

theatre under very difficult circumstances is sort of a small miracle every time we do it. We work primarily with prisoners in the Los Angles County Jail and California state prisons through our Jails to Jobs program, helping them recover emotionally and make a successful transition to life after prison through workshops that include relaxation, group improvisations and scene development, and the development of original productions that are performed inside jails and prisons for other inmates and outside audiences. We now pay some of the 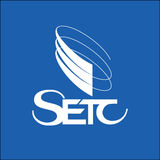 Please enjoy the Spring 2017 edition of Southern Theatre, a premier magazine covering theatre in the Southeastern United States and beyond.

Please enjoy the Spring 2017 edition of Southern Theatre, a premier magazine covering theatre in the Southeastern United States and beyond.