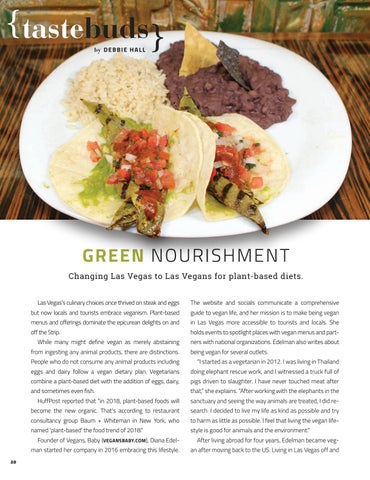 guide to vegan life, and her mission is to make being vegan

menus and offerings dominate the epicurean delights on and

in Las Vegas more accessible to tourists and locals. She

holds events to spotlight places with vegan menus and part-

While many might define vegan as merely abstaining from ingesting any animal products, there are distinctions.

ners with national organizations. Edelman also writes about being vegan for several outlets.

People who do not consume any animal products including

“I started as a vegetarian in 2012. I was living in Thailand

doing elephant rescue work, and I witnessed a truck full of

combine a plant-based diet with the addition of eggs, dairy,

pigs driven to slaughter. I have never touched meat after

and sometimes even fish.

that,” she explains. “After working with the elephants in the

HuffPost reported that “in 2018, plant-based foods will

sanctuary and seeing the way animals are treated, I did re-

become the new organic. That’s according to restaurant

search. I decided to live my life as kind as possible and try

to harm as little as possible. I feel that living the vegan life-

style is good for animals and the environment.”

man started her company in 2016 embracing this lifestyle.

an after moving back to the US. Living in Las Vegas off and 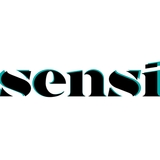