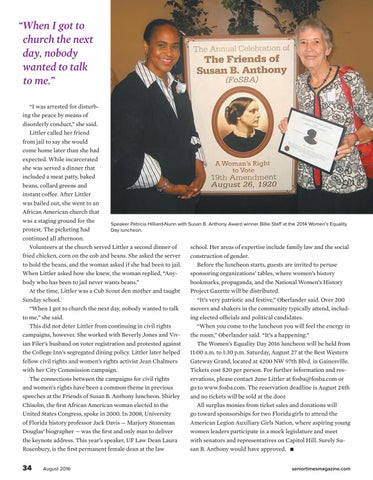 “When I got to church the next day, nobody wanted to talk to me.” “I was arrested for disturbing the peace by means of disorderly conduct,” she said. Littler called her friend from jail to say she would come home later than she had expected. While incarcerated she was served a dinner that included a meat patty, baked beans, collard greens and instant coffee. After Littler was bailed out, she went to an African American church that was a staging ground for the Speaker Patricia Hilliard-Nunn with Susan B. Anthony Award winner Billie Staff at the 2014 Women’s Equality protest. The picketing had Day luncheon. continued all afternoon. Volunteers at the church served Littler a second dinner of school. Her areas of expertise include family law and the social fried chicken, corn on the cob and beans. She asked the server construction of gender. to hold the beans, and the woman asked if she had been to jail. Before the luncheon starts, guests are invited to peruse When Littler asked how she knew, the woman replied, “Anysponsoring organizations’ tables, where women’s history body who has been to jail never wants beans.” bookmarks, propaganda, and the National Women’s History At the time, Littler was a Cub Scout den mother and taught Project Gazette will be distributed. Sunday school. “It’s very patriotic and festive,” Oberlander said. Over 200 “When I got to church the next day, nobody wanted to talk movers and shakers in the community typically attend, includto me,” she said. ing elected ofﬁcials and political candidates. This did not deter Littler from continuing in civil rights “When you come to the luncheon you will feel the energy in campaigns, however. She worked with Beverly Jones and Vivthe room,” Oberlander said. “It’s a happening.” ian Filer’s husband on voter registration and protested against The Women’s Equality Day 2016 luncheon will be held from the College Inn’s segregated dining policy. Littler later helped 11:00 a.m. to 1:30 p.m. Saturday, August 27 at the Best Western fellow civil rights and women’s rights activist Jean Chalmers Gateway Grand, located at 4200 NW 97th Blvd. in Gainesville. with her City Commission campaign. Tickets cost $20 per person. For further information and resThe connections between the campaigns for civil rights ervations, please contact June Littler at fosba@fosba.com or and women’s rights have been a common theme in previous go to www.fosba.com. The reservation deadline is August 24th speeches at the Friends of Susan B. Anthony luncheon. Shirley and no tickets will be sold at the door. Chisolm, the ﬁrst African American woman elected to the All surplus monies from ticket sales and donations will United States Congress, spoke in 2000. In 2008, University go toward sponsorships for two Florida girls to attend the of Florida history professor Jack Davis — Marjory Stoneman American Legion Auxiliary Girls Nation, where aspiring young Douglas’ biographer — was the ﬁrst and only man to deliver women leaders participate in a mock legislature and meet the keynote address. This year’s speaker, UF Law Dean Laura with senators and representatives on Capitol Hill. Surely SuRosenbury, is the ﬁrst permanent female dean at the law san B. Anthony would have approved. s