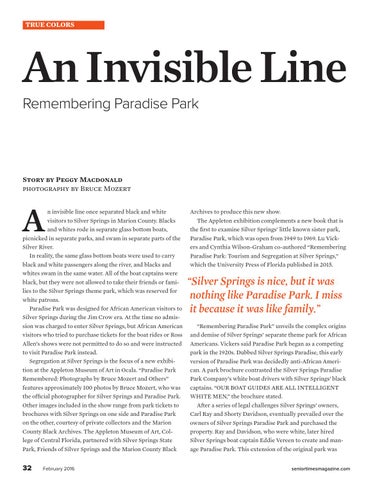 n invisible line once separated black and white visitors to Silver Springs in Marion County. Blacks and whites rode in separate glass bottom boats, picnicked in separate parks, and swam in separate parts of the Silver River. In reality, the same glass bottom boats were used to carry black and white passengers along the river, and blacks and whites swam in the same water. All of the boat captains were black, but they were not allowed to take their friends or families to the Silver Springs theme park, which was reserved for white patrons. Paradise Park was designed for African American visitors to Silver Springs during the Jim Crow era. At the time no admission was charged to enter Silver Springs, but African American visitors who tried to purchase tickets for the boat rides or Ross Allen’s shows were not permitted to do so and were instructed to visit Paradise Park instead. Segregation at Silver Springs is the focus of a new exhibition at the Appleton Museum of Art in Ocala. “Paradise Park Remembered: Photographs by Bruce Mozert and Others” features approximately 100 photos by Bruce Mozert, who was the ofﬁcial photographer for Silver Springs and Paradise Park. Other images included in the show range from park tickets to brochures with Silver Springs on one side and Paradise Park on the other, courtesy of private collectors and the Marion County Black Archives. The Appleton Museum of Art, College of Central Florida, partnered with Silver Springs State Park, Friends of Silver Springs and the Marion County Black

Archives to produce this new show. The Appleton exhibition complements a new book that is the ﬁrst to examine Silver Springs’ little known sister park, Paradise Park, which was open from 1949 to 1969. Lu Vickers and Cynthia Wilson-Graham co-authored “Remembering Paradise Park: Tourism and Segregation at Silver Springs,” which the University Press of Florida published in 2015.