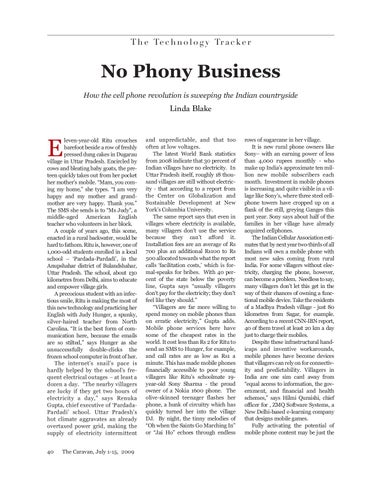 leven-year-old Ritu crouches barefoot beside a row of freshly pressed dung cakes in Dugarau village in Uttar Pradesh. Encircled by cows and bleating baby goats, the preteen quickly takes out from her pocket her mother’s mobile. “Mam, you coming my home,” she types. “I am very happy and my mother and grandmother are very happy. Thank you.” The SMS she sends is to “Ms Judy”, a middle-aged American English teacher who volunteers in her block. A couple of years ago, this scene, enacted in a rural backwater, would be hard to fathom. Ritu is, however, one of 1,000-odd students enrolled in a local school – ‘Pardada-Pardadi’, in the Anupshahar district of Bulandshahar, Uttar Pradesh. The school, about 130 kilometres from Delhi, aims to educate and empower village girls. A precocious student with an infectious smile, Ritu is making the most of this new technology and practicing her English with Judy Hunger, a spunky, silver-haired teacher from North Carolina. “It is the best form of communication here, because the emails are so stilted,” says Hunger as she unsuccessfully double-clicks the frozen school computer in front of her. The internet’s snail’s pace is hardly helped by the school’s frequent electrical outages – at least a dozen a day. “The nearby villagers are lucky if they get two hours of electricity a day,” says Renuka Gupta, chief executive of ‘PardadaPardadi’ school. Uttar Pradesh’s hot climate aggravates an already overtaxed power grid, making the supply of electricity intermittent 40

and unpredictable, and that too often at low voltages. The latest World Bank statistics from 2008 indicate that 30 percent of Indian villages have no electricity. In Uttar Pradesh itself, roughly 18 thousand villages are still without electricity - that according to a report from the Center on Globalization and Sustainable Development at New York’s Columbia University. The same report says that even in villages where electricity is available, many villagers don’t use the service because they can’t afford it. Installation fees are an average of Rs 700 plus an additional Rs100 to Rs 500 allocated towards what the report calls ‘facilitation costs,’ which is formal-speaks for bribes. With 40 percent of the state below the poverty line, Gupta says “usually villagers don’t pay for the electricity; they don’t feel like they should.” “Villagers are far more willing to spend money on mobile phones than on erratic electricity,” Gupta adds. Mobile phone services here have some of the cheapest rates in the world. It cost less than Rs 2 for Ritu to send an SMS to Hunger, for example, and call rates are as low as Rs1 a minute. This has made mobile phones financially accessible to poor young villagers like Ritu’s schoolmate 19year-old Sony Sharma - the proud owner of a Nokia 1600 phone. The olive-skinned teenager flashes her phone, a hunk of circuitry which has quickly turned her into the village DJ. By night, the tinny melodies of “Oh when the Saints Go Marching In” or “Jai Ho” echoes through endless

rows of sugarcane in her village. It is new rural phone owners like Sony– with an earning power of less than 4,000 rupees monthly - who make up India’s approximate ten million new mobile subscribers each month. Investment in mobile phones is increasing and quite visible in a village like Sony’s, where three steel cellphone towers have cropped up on a flank of the still, greying Ganges this past year. Sony says about half of the families in her village have already acquired cellphones. The Indian Cellular Association estimates that by next year two-thirds of all Indians will own a mobile phone with most new sales coming from rural India. For some villagers without electricity, charging the phone, however, can become a problem. Needless to say, many villagers don’t let this get in the way of their chances of owning a functional mobile device. Take the residents of a Madhya Pradesh village - just 80 kilometres from Sagar, for example. According to a recent CNN-IBN report, 40 of them travel at least 20 km a day just to charge their mobiles. Despite these infrastructural handicaps and inventive workarounds, mobile phones have become devices that villagers can rely on for connectivity and predictability. Villagers in India are one sim card away from “equal access to information, the government, and financial and health schemes,” says Hilmi Quraishi, chief officer for , ZMQ Software Systems, a New Delhi-based e-learning company that designs mobile games. Fully activating the potential of mobile phone content may be just the

How the cell phone revolution is sweeping the Indian countryside