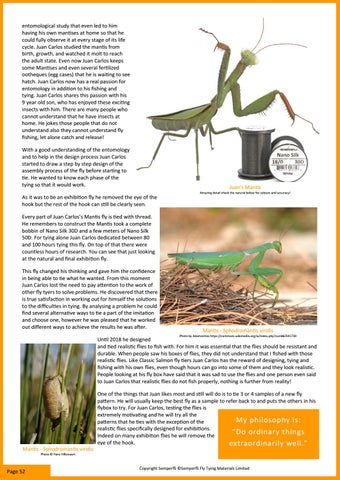 entomological study that even led to him having his own man ses at home so that he could fully observe it at every stage of its life cycle. Juan Carlos studied the man s from birth, growth, and watched it molt to reach the adult state. Even now Juan Carlos keeps some Man ses and even several fer lized ootheques (egg cases) that he is wai ng to see hatch. Juan Carlos now has a real passion for entomology in addi on to his fishing and tying. Juan Carlos shares this passion with his 9 year old son, who has enjoyed these exci ng insects with him. There are many people who cannot understand that he have insects at home. He jokes those people that do not understand also they cannot understand fly fishing, let alone catch and release! With a good understanding of the entomology and to help in the design process Juan Carlos started to draw a step by step design of the assembly process of the fly before star ng to e. He wanted to know each phase of the tying so that it would work.

Juan’s Man s Amazing detail check the natural below for colours and accuracy!

As it was to be an exhibi on fly he removed the eye of the hook but the rest of the hook can s ll be clearly seen. Every part of Juan Carlos’s Man s fly is ed with thread. He remembers to construct the Man s took a complete bobbin of Nano Silk 30D and a few meters of Nano Silk 50D. For tying alone Juan Carlos dedicated between 80 and 100 hours tying this fly. On top of that there were countless hours of research. You can see that just looking at the natural and final exhibi on fly. This fly changed his thinking and gave him the confidence in being able to e what he wanted. From this moment Juan Carlos lost the need to pay a en on to the work of other fly tyers to solve problems. He discovered that there is true sa sfac on in working out for himself the solu ons to the diﬃcul es in tying. By analysing a problem he could find several alterna ve ways to e a part of the imita on and choose one, however he was pleased that he worked out diﬀerent ways to achieve the results he was a er.

Un l 2018 he designed and ed realis c flies to fish with. For him it was essen al that the flies should be resistant and durable. When people saw his boxes of flies, they did not understand that I fished with those realis c flies. Like Classic Salmon fly ers Juan Carlos has the reward of designing, tying and fishing with his own flies, even though hours can go into some of them and they look realis c. People looking at his fly box have said that it was sad to use the flies and one person even said to Juan Carlos that realis c flies do not fish properly, nothing is further from reality!

One of the things that Juan likes most and s ll will do is to e 3 or 4 samples of a new fly pa ern. He will usually keep the best fly as a sample to refer back to and puts the others in his flybox to try. For Juan Carlos, tes ng the flies is extremely mo va ng and he will try all the My philosophy is: pa erns that he es with the excep on of the realis c flies specifically designed for exhibi ons. “Do ordinary things Indeed on many exhibi on flies he will remove the eye of the hook. extraordinarily well.” 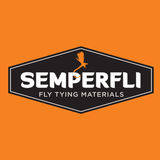