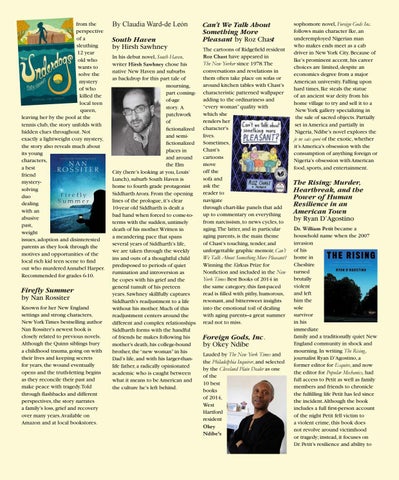 from the perspective of a sleuthing 12 year old who wants to solve the mystery of who killed the local teen queen, leaving her by the pool at the tennis club, the story unfolds with hidden clues throughout. Not exactly a lightweight cozy mystery, the story also reveals much about its young characters, a best friend mysterysolving duo dealing with an abusive past, weight issues, adoption and disinterested parents as they look through the motives and opportunities of the local rich kid teen scene to find out who murdered Annabel Harper. Recommended for grades 6-10.

Firefly Summer by Nan Rossiter Known for her New England settings and strong characters, New York Times bestselling author Nan Rossiter’s newest book is closely related to previous novels. Although the Quinn siblings bury a childhood trauma, going on with their lives and keeping secrets for years, the wound eventually opens and the truth-letting begins as they reconcile their past and make peace with tragedy.Told through flashbacks and different perspectives, the story narrates a family’s loss, grief and recovery over many years. Available on Amazon and at local bookstores.

By Claudia Ward-de León South Haven by Hirsh Sawhney In his debut novel, South Haven, writer Hirsh Sawhney chose his native New Haven and suburbs as backdrop for this part tale of mourning, part comingof-age story. A patchwork of fictionalized and semifictionalized places in and around the Elm City (here’s looking at you, Louis’ Lunch), suburb South Haven is home to fourth grade protagonist Siddharth Arora. From the opening lines of the prologue, it’s clear 10-year old Siddharth is dealt a bad hand when forced to come-toterms with the sudden, untimely death of his mother. Written in a meandering pace that spans several years of Siddharth’s life, we are taken through the weekly ins and outs of a thoughtful child predisposed to periods of quiet rumination and introversion as he copes with his grief and the general tumult of his preteen years. Sawhney skillfully captures Siddharth’s readjustment to a life without his mother. Much of this readjustment centers around the different and complex relationships Siddharth forms with the handful of friends he makes following his mother’s death, his college-bound brother, the “new woman” in his Dad’s life, and with his larger-thanlife father, a radically opinionated academic who is caught between what it means to be American and the culture he’s left behind.

Can’t We Talk About Something More Pleasant by Roz Chast The cartoons of Ridgefield resident Roz Chast have appeared in The New Yorker since 1978.The conversations and revelations in them often take place on sofas or around kitchen tables with Chast’s characteristic patterned wallpaper adding to the ordinariness and “every woman” quality with which she renders her character’s lives. Sometimes, Chast’s cartoons move off the sofa and ask the reader to navigate through chart-like panels that add up to commentary on everything from narcissism, to news cycles, to aging.The latter, and in particular aging parents, is the main theme of Chast’s touching, tender, and unforgettable graphic memoir, Can’t We Talk About Something More Pleasant? Winning the Kirkus Prize for Nonfiction and included in the New York Times Best Books of 2014 in the same category, this fast-paced read is filled with pithy, humorous, resonant, and bittersweet insights into the emotional toil of dealing with aging parents--a great summer read not to miss.

Foreign Gods, Inc. by Okey Ndibe Lauded by The New York Times and the Philadelphia Inquirer, and selected by the Cleveland Plain Dealer as one of the 10 best books of 2014, West Hartford resident Okey Ndibe’s

sophomore novel, Foreign Gods Inc. follows main character Ike, an underemployed Nigerian man who makes ends meet as a cab driver in New York City. Because of Ike’s prominent accent, his career choices are limited, despite an economics degree from a major American university. Falling upon hard times, Ike steals the statue of an ancient war deity from his home village to try and sell it to a New York gallery specializing in the sale of sacred objects. Partially set in America and partially in Nigeria, Ndibe’s novel explores the je ne sais quoi of the exotic, whether it’s America’s obsession with the consumption of anything foreign or Nigeria’s obsession with American food, sports, and entertainment.

The Rising: Murder, Heartbreak, and the Power of Human Resilience in an American Town by Ryan D’Agostino Dr. William Petit became a household name when the 2007 invasion of his home in Cheshire turned brutally violent and left him the sole survivor in his immediate family and a traditionally quiet New England community in shock and mourning. In writing The Rising, journalist Ryan D’Agostino, a former editor for Esquire, and now the editor for Popular Mechanics, had full access to Petit as well as family members and friends to chronicle the fulfilling life Petit has led since the incident. Although the book includes a full first-person account of the night Petit fell victim to a violent crime, this book does not revolve around victimhood or tragedy; instead, it focuses on Dr. Petit’s resilience and ability to