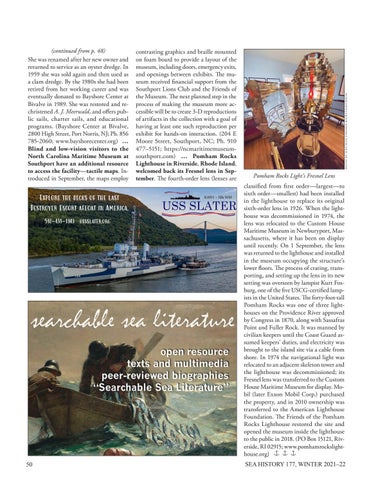 Explore the decks of the last Destroyer Escort afloat in America. 518-431-1943 ussslater.org

contrasting graphics and braille mounted on foam board to provide a layout of the museum, including doors, emergency exits, and openings between exhibits. The museum received financial support from the Southport Lions Club and the Friends of the Museum. The next planned step in the process of making the museum more accessible will be to create 3-D reproductions of artifacts in the collection with a goal of having at least one such reproduction per exhibit for hands-on interaction. (204 E Moore Street, Southport, NC; Ph. 910 477–5151; https://ncmaritimemuseumsouthport.com) … Pomham Rocks Lighthouse in Riverside, Rhode Island, welcomed back its Fresnel lens in September. The fourth-order lens (lenses are

(continued from p. 48) She was renamed after her new owner and returned to service as an oyster dredge. In 1959 she was sold again and then used as a clam dredge. By the 1980s she had been retired from her working career and was eventually donated to Bayshore Center at Bivalve in 1989. She was restored and rechristened A. J. Meerwald, and offers public sails, charter sails, and educational programs. (Bayshore Center at Bivalve, 2800 High Street, Port Norris, NJ; Ph. 856 785-2060; www.bayshorecenter.org) … Blind and low-vision visitors to the North Carolina Maritime Museum at Southport have an additional resource to access the facility—tactile maps. Introduced in September, the maps employ

Pomham Rocks Light’s Fresnel Lens classified from first order—largest—to sixth order—smallest) had been installed in the lighthouse to replace its original sixth-order lens in 1926. When the lighthouse was decommissioned in 1974, the lens was relocated to the Custom House Maritime Museum in Newburyport, Massachusetts, where it has been on display until recently. On 1 September, the lens was returned to the lighthouse and installed in the museum occupying the structure’s lower floors. The process of crating, transporting, and setting up the lens in its new setting was overseen by lampist Kurt Fosburg, one of the five USCG-certified lampists in the United States. The forty-foot-tall Pomham Rocks was one of three lighthouses on the Providence River approved by Congress in 1870, along with Sassafras Point and Fuller Rock. It was manned by civilian keepers until the Coast Guard assumed keepers’ duties, and electricity was brought to the island site via a cable from shore. In 1974 the navigational light was relocated to an adjacent skeleton tower and the lighthouse was decommissioned; its Fresnel lens was transferred to the Custom House Maritime Museum for display. Mobil (later Exxon Mobil Corp.) purchased the property, and in 2010 ownership was transferred to the American Lighthouse Foundation. The Friends of the Pomham Rocks Lighthouse restored the site and opened the museum inside the lighthouse to the public in 2018. (PO Box 15121, Riverside, RI 02915; www.pomhamrockslighthouse.org) SEA HISTORY 177, WINTER 2021–22