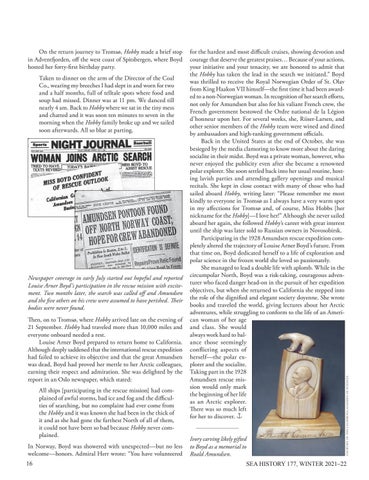 Taken to dinner on the arm of the Director of the Coal Co., wearing my breeches I had slept in and worn for two and a half months, full of telltale spots where food and soup had missed. Dinner was at 11 pm. We danced till nearly 4 am. Back to Hobby where we sat in the tiny mess and chatted and it was soon ten minutes to seven in the morning when the Hobby family broke up and we sailed soon afterwards. All so blue at parting.

Newspaper coverage in early July started out hopeful and reported Louise Arner Boyd’s participation in the rescue mission with excitement. Two months later, the search was called off and Amundsen and the five others on his crew were assumed to have perished. Their bodies were never found. Then, on to Tromsø, where Hobby arrived late on the evening of 21 September. Hobby had traveled more than 10,000 miles and everyone onboard needed a rest. Louise Arner Boyd prepared to return home to California. Although deeply saddened that the international rescue expedition had failed to achieve its objective and that the great Amundsen was dead, Boyd had proved her mettle to her Arctic colleagues, earning their respect and admiration. She was delighted by the report in an Oslo newspaper, which stated: All ships [participating in the rescue mission] had complained of awful storms, bad ice and fog and the difficulties of searching, but no complaint had ever come from the Hobby and it was known she had been in the thick of it and as she had gone the farthest North of all of them, it could not have been so bad because Hobby never complained. In Norway, Boyd was showered with unexpected—but no less welcome—honors. Admiral Herr wrote: “You have volunteered 16

for the hardest and most difficult cruises, showing devotion and courage that deserve the greatest praises… Because of your actions, your initiative and your tenacity, we are honored to admit that the Hobby has taken the lead in the search we initiated.” Boyd was thrilled to receive the Royal Norwegian Order of St. Olav from King Haakon VII himself—the first time it had been awarded to a non-Norwegian woman. In recognition of her search efforts, not only for Amundsen but also for his valiant French crew, the French government bestowed the Ordre national de la Légion d’honneur upon her. For several weeks, she, Riiser-Larsen, and other senior members of the Hobby team were wined and dined by ambassadors and high-ranking government officials. Back in the United States at the end of October, she was besieged by the media clamoring to know more about the daring socialite in their midst. Boyd was a private woman, however, who never enjoyed the publicity even after she became a renowned polar explorer. She soon settled back into her usual routine, hosting lavish parties and attending gallery openings and musical recitals. She kept in close contact with many of those who had sailed aboard Hobby, writing later: “Please remember me most kindly to everyone in Tromsø as I always have a very warm spot in my affections for Tromsø and, of course, Miss Hobbs [her nickname for the Hobby]—I love her!” Although she never sailed aboard her again, she followed Hobby’s career with great interest until the ship was later sold to Russian owners in Novosobirsk. Participating in the 1928 Amundsen rescue expedition completely altered the trajectory of Louise Arner Boyd’s future. From that time on, Boyd dedicated herself to a life of exploration and polar science in the frozen world she loved so passionately. She managed to lead a double life with aplomb. While in the circumpolar North, Boyd was a risk-taking, courageous adventurer who faced danger head-on in the pursuit of her expedition objectives, but when she returned to California she stepped into the role of the dignified and elegant society doyenne. She wrote books and traveled the world, giving lectures about her Arctic adventures, while struggling to conform to the life of an American woman of her age and class. She would always work hard to balance those seemingly conflicting aspects of herself—the polar explorer and the socialite. Taking part in the 1928 Amundsen rescue mission would only mark the beginning of her life as an Arctic explorer. There was so much left for her to discover. Ivory carving likely gifted to Boyd as a memorial to Roald Amundsen.

courtesy of the california academy of sciences

On the return journey to Tromsø, Hobby made a brief stop in Adventfjorden, off the west coast of Spitsbergen, where Boyd hosted her forty-first birthday party.