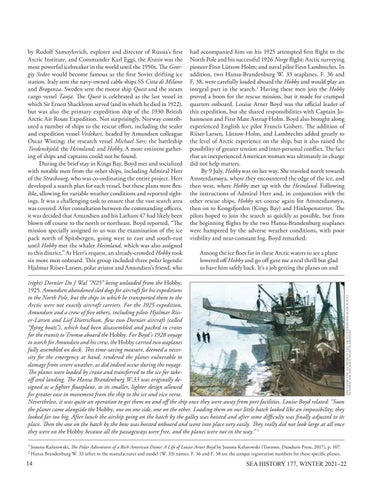 had accompanied him on his 1925 attempted first flight to the North Pole and his successful 1926 Norge flight; Arctic surveying pioneer Finn Lützow Holm; and naval pilot Finn Lambrechts. In addition, two Hansa-Brandenburg W. 33 seaplanes, F. 36 and F. 38, were carefully loaded aboard the Hobby and would play an integral part in the search.2 Having these men join the Hobby proved a boon for the rescue mission, but it made for cramped quarters onboard. Louise Arner Boyd was the official leader of this expedition, but she shared responsibilities with Captain Johannesen and First Mate Astrup Holm. Boyd also brought along experienced English ice pilot Francis Gisbert. The addition of Riiser-Larsen, Lützow-Holm, and Lambrechts added greatly to the level of Arctic experience on the ship, but it also raised the possibility of greater tension and inter-personal conflict. The fact that an inexperienced American woman was ultimately in charge did not help matters. By 9 July, Hobby was on her way. She traveled north towards Amsterdamøya, where they encountered the edge of the ice, and then west, where Hobby met up with the Heimland. Following the instructions of Admiral Herr and, in conjunction with the other rescue ships, Hobby set course again for Amsterdamøya, then on to Kongsfjorden (Kings Bay) and Hinlopenstretet. The pilots hoped to join the search as quickly as possible, but from the beginning flights by the two Hansa-Brandenburg seaplanes were hampered by the adverse weather conditions, with poor visibility and near-constant fog. Boyd remarked: Among the ice floes far in these Arctic waters to see a plane lowered off Hobby and go off gave me a real thrill but glad to have him safely back. It’s a job getting the planes on and

(right) Dornier Do J Wal “N25” being unloaded from the Hobby, 1925. Amundsen abandoned sled dogs for aircraft for his expeditions to the North Pole, but the ships in which he transported them to the Arctic were not exactly aircraft carriers. For the 1925 expedition, Amundsen and a crew of five others, including pilots Hjalmar Riiser-Larsen and Lief Dietrichson, flew two Dornier aircraft (called “flying boats”), which had been disassembled and packed in crates for the transit to Tromsø aboard the Hobby. For Boyd’s 1928 voyage to search for Amundsen and his crew, the Hobby carried two seaplanes fully assembled on deck. This time-saving measure, deemed a necessity for the emergency at hand, rendered the planes vulnerable to damage from severe weather, as did indeed occur during the voyage. The planes were loaded by crane and transferred to the ice for takeoff and landing. The Hansa Brandenburg W. 33 was originally designed as a fighter floatplane, so its smaller, lighter design allowed for greater ease in movement from the ship to the ice and vice versa. Nevertheless, it was quite an operation to get them on and off the ship once they were away from port facilities. Louise Boyd related: “Soon the planes came alongside the Hobby, one on one side, one on the other. Loading them on our little hatch looked like an impossibility; they looked far too big. After lunch the airship going on the hatch by the galley was hoisted and after some difficulty was finally adjusted to its place. Then the one on the hatch by the bow was hoisted onboard and went into place very easily. They really did not look large at all once they were on the Hobby because all the passageways were free, and the planes were not in the way.” 1 1 2

by Rudolf Samoylovich, explorer and director of Russia’s first Arctic Institute, and Commander Karl Eggi, the Krasin was the most powerful icebreaker in the world until the 1950s. The Georgiy Sedov would become famous as the first Soviet drifting ice station. Italy sent the navy-owned cable ships SS Citta di Milano and Braganza. Sweden sent the motor ship Quest and the steam cargo vessel Tanja. The Quest is celebrated as the last vessel in which Sir Ernest Shackleton served (and in which he died in 1922), but was also the primary expedition ship of the 1930 British Arctic Air Route Expedition. Not surprisingly, Norway contributed a number of ships to the rescue effort, including the sealer and expedition vessel Veslekari, headed by Amundsen colleague Oscar Wisting; the research vessel Michael Sars; the battleship Tordenskjold; the Heimland; and Hobby. A more eminent gathering of ships and captains could not be found. During the brief stay in Kings Bay, Boyd met and socialized with notable men from the other ships, including Admiral Herr of the Strasbourg, who was co-ordinating the entire project. Herr developed a search plan for each vessel, but these plans were flexible, allowing for variable weather conditions and reported sightings. It was a challenging task to ensure that the vast search area was covered. After consultation between the commanding officers, it was decided that Amundsen and his Latham 47 had likely been blown off course to the north or northeast. Boyd reported, “The mission specially assigned to us was the examination of the ice pack north of Spitsbergen, going west to east and south-east until Hobby met the whaler Heimland, which was also assigned to this district.” At Herr’s request, an already-crowded Hobby took six more men onboard. This group included three polar legends: Hjalmur Riiser-Larsen, polar aviator and Amundsen’s friend, who

Joanna Kafarowski, The Polar Adventures of a Rich American Dame: A Life of Louise Arner Boyd by Joanna Kafarowski (Toronto, Dundurn Press, 2017), p. 107. Hansa Brandenburg W. 33 refers to the manufacturer and model (W. 33) names. F. 36 and F. 38 are the unique registration numbers for these specific planes.