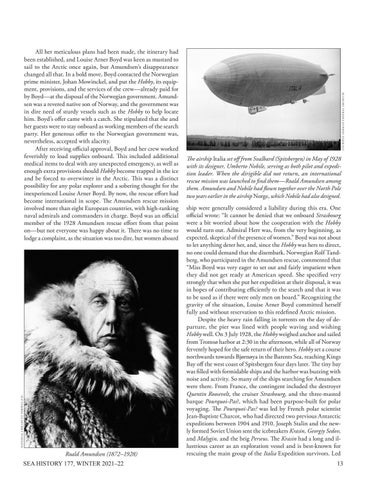 All her meticulous plans had been made, the itinerary had been established, and Louise Arner Boyd was keen as mustard to sail to the Arctic once again, but Amundsen’s disappearance changed all that. In a bold move, Boyd contacted the Norwegian prime minister, Johan Mowinckel, and put the Hobby, its equipment, provisions, and the services of the crew—already paid for by Boyd—at the disposal of the Norwegian government. Amundsen was a revered native son of Norway, and the government was in dire need of sturdy vessels such as the Hobby to help locate him. Boyd’s offer came with a catch. She stipulated that she and her guests were to stay onboard as working members of the search party. Her generous offer to the Norwegian government was, nevertheless, accepted with alacrity. After receiving official approval, Boyd and her crew worked feverishly to load supplies onboard. This included additional medical items to deal with any unexpected emergency, as well as enough extra provisions should Hobby become trapped in the ice and be forced to overwinter in the Arctic. This was a distinct possibility for any polar explorer and a sobering thought for the inexperienced Louise Arner Boyd. By now, the rescue effort had become international in scope. The Amundsen rescue mission involved more than eight European countries, with high-ranking naval admirals and commanders in charge. Boyd was an official member of the 1928 Amundsen rescue effort from that point on—but not everyone was happy about it. There was no time to lodge a complaint, as the situation was too dire, but women aboard

The airship Italia set off from Svalbard (Spitsbergen) in May of 1928 with its designer, Umberto Nobile, serving as both pilot and expedition leader. When the dirigible did not return, an international rescue mission was launched to find them—Roald Amundsen among them. Amundsen and Nobile had flown together over the North Pole two years earlier in the airship Norge, which Nobile had also designed. ship were generally considered a liability during this era. One official wrote: “It cannot be denied that we onboard Strasbourg were a bit worried about how the cooperation with the Hobby would turn out. Admiral Herr was, from the very beginning, as expected, skeptical of the presence of women.” Boyd was not about to let anything deter her, and, since the Hobby was hers to direct, no one could demand that she disembark. Norwegian Rolf Tandberg, who participated in the Amundsen rescue, commented that “Miss Boyd was very eager to set out and fairly impatient when they did not get ready at American speed. She specified very strongly that when she put her expedition at their disposal, it was in hopes of contributing efficiently to the search and that it was to be used as if there were only men on board.” Recognizing the gravity of the situation, Louise Arner Boyd committed herself fully and without reservation to this redefined Arctic mission. Despite the heavy rain falling in torrents on the day of departure, the pier was lined with people waving and wishing Hobby well. On 3 July 1928, the Hobby weighed anchor and sailed from Tromsø harbor at 2:30 in the afternoon, while all of Norway fervently hoped for the safe return of their hero. Hobby set a course northwards towards Bjørnøya in the Barents Sea, reaching Kings Bay off the west coast of Spitsbergen four days later. The tiny bay was filled with formidable ships and the harbor was buzzing with noise and activity. So many of the ships searching for Amundsen were there. From France, the contingent included the destroyer Quentin Roosevelt, the cruiser Strasbourg, and the three-masted barque Pourquoi-Pas?, which had been purpose-built for polar voyaging. The Pourquoi-Pas? was led by French polar scientist Jean-Baptiste Charcot, who had directed two previous Antarctic expeditions between 1904 and 1910. Joseph Stalin and the newly formed Soviet Union sent the icebreakers Krasin, Georgiy Sedov, and Malygin, and the brig Perseus. The Krasin had a long and illustrious career as an exploration vessel and is best-known for rescuing the main group of the Italia Expedition survivors. Led 13