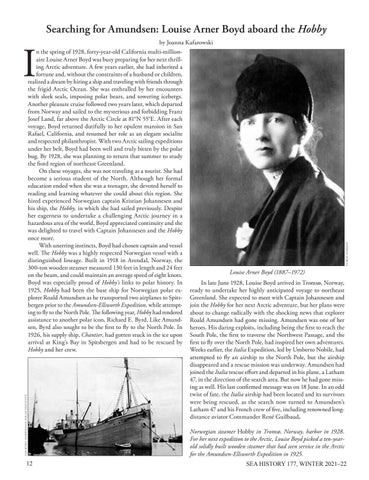 Searching for Amundsen: Louise Arner Boyd aboard the Hobby

n the spring of 1928, forty-year-old California multi-millionaire Louise Arner Boyd was busy preparing for her next thrilling Arctic adventure. A few years earlier, she had inherited a fortune and, without the constraints of a husband or children, realized a dream by hiring a ship and traveling with friends through the frigid Arctic Ocean. She was enthralled by her encounters with sleek seals, imposing polar bears, and towering icebergs. Another pleasure cruise followed two years later, which departed from Norway and sailed to the mysterious and forbidding Franz Josef Land, far above the Arctic Circle at 81°N 55°E. After each voyage, Boyd returned dutifully to her opulent mansion in San Rafael, California, and resumed her role as an elegant socialite and respected philanthropist. With two Arctic sailing expeditions under her belt, Boyd had been well and truly bitten by the polar bug. By 1928, she was planning to return that summer to study the fiord region of northeast Greenland. On these voyages, she was not traveling as a tourist. She had become a serious student of the North. Although her formal education ended when she was a teenager, she devoted herself to reading and learning whatever she could about this region. She hired experienced Norwegian captain Kristian Johannesen and his ship, the Hobby, in which she had sailed previously. Despite her eagerness to undertake a challenging Arctic journey in a hazardous area of the world, Boyd appreciated continuity and she was delighted to travel with Captain Johannesen and the Hobby once more. With unerring instincts, Boyd had chosen captain and vessel well. The Hobby was a highly respected Norwegian vessel with a distinguished lineage. Built in 1918 in Arendal, Norway, the 300-ton wooden steamer measured 130 feet in length and 24 feet on the beam, and could maintain an average speed of eight knots. Boyd was especially proud of Hobby’s links to polar history. In 1925, Hobby had been the base ship for Norwegian polar explorer Roald Amundsen as he transported two airplanes to Spitsbergen prior to the Amundsen-Ellsworth Expedition, while attempting to fly to the North Pole. The following year, Hobby had rendered assistance to another polar icon, Richard E. Byrd. Like Amundsen, Byrd also sought to be the first to fly to the North Pole. In 1926, his supply ship, Chantier, had gotten stuck in the ice upon arrival at King’s Bay in Spitsbergen and had to be rescued by Hobby and her crew.

Louise Arner Boyd (1887–1972) In late June 1928, Louise Boyd arrived in Tromsø, Norway, ready to undertake her highly anticipated voyage to northeast Greenland. She expected to meet with Captain Johannesen and join the Hobby for her next Arctic adventure, but her plans were about to change radically with the shocking news that explorer Roald Amundsen had gone missing. Amundsen was one of her heroes. His daring exploits, including being the first to reach the South Pole, the first to traverse the Northwest Passage, and the first to fly over the North Pole, had inspired her own adventures. Weeks earlier, the Italia Expedition, led by Umberto Nobile, had attempted to fly an airship to the North Pole, but the airship disappeared and a rescue mission was underway. Amundsen had joined the Italia rescue effort and departed in his plane, a Latham 47, in the direction of the search area. But now he had gone missing as well. His last confirmed message was on 18 June. In an odd twist of fate, the Italia airship had been located and its survivors were being rescued, as the search now turned to Amundsen’s Latham 47 and his French crew of five, including renowned longdistance aviator Commander René Guilbaud. Norwegian steamer Hobby in Tromsø, Norway, harbor in 1928. For her next expedition to the Arctic, Louise Boyd picked a ten-yearold solidly built wooden steamer that had seen service in the Arctic for the Amundsen-Ellsworth Expedition in 1925. SEA HISTORY 177, WINTER 2021–22