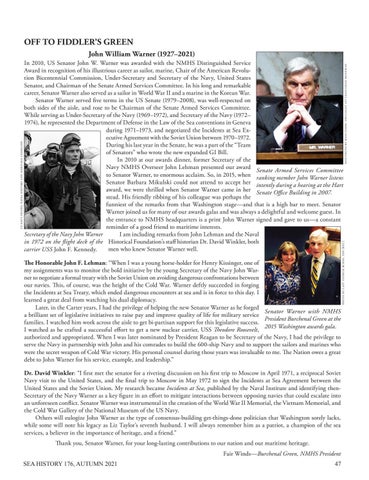 In 2010, US Senator John W. Warner was awarded with the NMHS Distinguished Service Award in recognition of his illustrious career as sailor, marine, Chair of the American Revolution Bicentennial Commission, Under-Secretary and Secretary of the Navy, United States Senator, and Chairman of the Senate Armed Services Committee. In his long and remarkable career, Senator Warner also served as a sailor in World War II and a marine in the Korean War. Senator Warner served five terms in the US Senate (1979–2008), was well-respected on both sides of the aisle, and rose to be Chairman of the Senate Armed Services Committee. While serving as Under-Secretary of the Navy (1969–1972), and Secretary of the Navy (1972– 1974), he represented the Department of Defense in the Law of the Sea conventions in Geneva during 1971–1973, and negotiated the Incidents at Sea Executive Agreement with the Soviet Union between 1970–1972. During his last year in the Senate, he was a part of the “Team of Senators” who wrote the new expanded G I Bill. In 2010 at our awards dinner, former Secretary of the Navy NMHS Overseer John Lehman presented our award Senate Armed Services Committee to Senator Warner, to enormous acclaim. So, in 2015, when ranking member John Warner listens Senator Barbara Mikulski could not attend to accept her intently during a hearing at the Hart award, we were thrilled when Senator Warner came in her Senate Office Building in 2007. stead. His friendly ribbing of his colleague was perhaps the funniest of the remarks from that Washington stage—and that is a high bar to meet. Senator Warner joined us for many of our awards galas and was always a delightful and welcome guest. In the entrance to NMHS headquarters is a print John Warner signed and gave to us—a constant reminder of a good friend to maritime interests. I am including remarks from John Lehman and the Naval Secretary of the Navy John Warner in 1972 on the flight deck of the Historical Foundation’s staff historian Dr. David Winkler, both men who knew Senator Warner well. carrier USS John F. Kennedy.

The Honorable John F. Lehman: “When I was a young horse-holder for Henry Kissinger, one of my assignments was to monitor the bold initiative by the young Secretary of the Navy John Warner to negotiate a formal treaty with the Soviet Union on avoiding dangerous confrontations between our navies. This, of course, was the height of the Cold War. Warner deftly succeeded in forging the Incidents at Sea Treaty, which ended dangerous encounters at sea and is in force to this day. I learned a great deal from watching his dual diplomacy. Later, in the Carter years, I had the privilege of helping the new Senator Warner as he forged Senator Warner with NMHS a brilliant set of legislative initiatives to raise pay and improve quality of life for military service President Burchenal Green at the families. I watched him work across the aisle to get bi-partisan support for this legislative success. 2015 Washington awards gala. I watched as he crafted a successful effort to get a new nuclear carrier, USS Theodore Roosevelt, authorized and appropriated. When I was later nominated by President Reagan to be Secretary of the Navy, I had the privilege to serve the Navy in partnership with John and his comrades to build the 600-ship Navy and to support the sailors and marines who were the secret weapon of Cold War victory. His personal counsel during those years was invaluable to me. The Nation owes a great debt to John Warner for his service, example, and leadership.” Dr. David Winkler: “I first met the senator for a riveting discussion on his first trip to Moscow in April 1971, a reciprocal Soviet Navy visit to the United States, and the final trip to Moscow in May 1972 to sign the Incidents at Sea Agreement between the United States and the Soviet Union. My research became Incidents at Sea, published by the Naval Institute and identifying thenSecretary of the Navy Warner as a key figure in an effort to mitigate interactions between opposing navies that could escalate into an unforeseen conflict. Senator Warner was instrumental in the creation of the World War II Memorial, the Vietnam Memorial, and the Cold War Gallery of the National Museum of the US Navy. Others will eulogize John Warner as the type of consensus-building get-things-done politician that Washington sorely lacks, while some will note his legacy as Liz Taylor’s seventh husband. I will always remember him as a patriot, a champion of the sea services, a believer in the importance of heritage, and a friend.” Thank you, Senator Warner, for your long-lasting contributions to our nation and our maritime heritage. Fair Winds—Burchenal Green, NMHS President