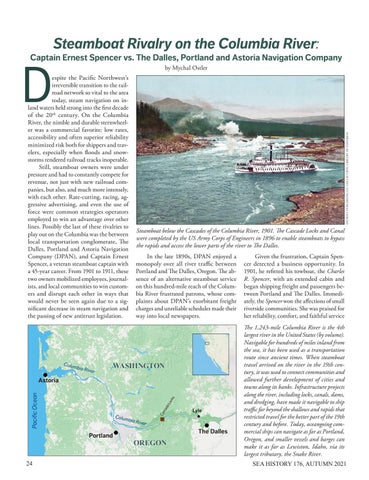 Steamboat Rivalry on the Columbia River:

espite the Pacific Northwest’s irreversible transition to the railroad network so vital to the area today, steam navigation on inland waters held strong into the first decade of the 20th century. On the Columbia River, the nimble and durable sternwheeler was a commercial favorite: low rates, accessibility and often superior reliability minimized risk both for shippers and travelers, especially when floods and snowstorms rendered railroad tracks inoperable. Still, steamboat owners were under pressure and had to constantly compete for revenue, not just with new railroad companies, but also, and much more intensely, with each other. Rate-cutting, racing, aggressive advertising, and even the use of force were common strategies operators employed to win an advantage over other lines. Possibly the last of these rivalries to play out on the Columbia was the between local transportation conglomerate, The Dalles, Portland and Astoria Navigation Company (DPAN), and Captain Ernest Spencer, a veteran steamboat captain with a 45-year career. From 1901 to 1911, these two owners mobilized employees, journalists, and local communities to win customers and disrupt each other in ways that would never be seen again due to a significant decrease in steam navigation and the passing of new antitrust legislation.

Steamboat below the Cascades of the Columbia River, 1901. The Cascade Locks and Canal were completed by the US Army Corps of Engineers in 1896 to enable steamboats to bypass the rapids and access the lower parts of the river to The Dalles. In the late 1890s, DPAN enjoyed a monopoly over all river traffic between Portland and The Dalles, Oregon. The absence of an alternative steamboat service on this hundred-mile reach of the Columbia River frustrated patrons, whose complaints about DPAN’s exorbitant freight charges and unreliable schedules made their way into local newspapers.

Given the frustration, Captain Spencer detected a business opportunity. In 1901, he refitted his towboat, the Charles R. Spencer, with an extended cabin and began shipping freight and passengers between Portland and The Dalles. Immediately, the Spencer won the affections of small riverside communities. She was praised for her reliability, comfort, and faithful service The 1,243-mile Columbia River is the 4th largest river in the United States (by volume). Navigable for hundreds of miles inland from the sea, it has been used as a transportation route since ancient times. When steamboat travel arrived on the river in the 19th century, it was used to connect communities and allowed further development of cities and towns along its banks. Infrastructure projects along the river, including locks, canals, dams, and dredging, have made it navigable to ship traffic far beyond the shallows and rapids that restricted travel for the better part of the 19th century and before. Today, oceangoing commercial ships can navigate as far as Portland, Oregon, and smaller vessels and barges can make it as far as Lewiston, Idaho, via its largest tributary, the Snake River. SEA HISTORY 176, AUTUMN 2021