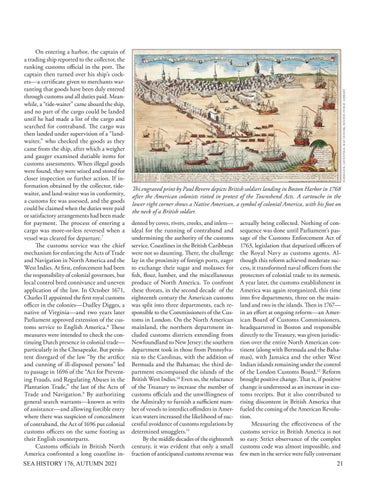 On entering a harbor, the captain of a trading ship reported to the collector, the ranking customs official in the port. The captain then turned over his ship’s cockets—a certificate given to merchants warranting that goods have been duly entered through customs and all duties paid. Meanwhile, a “tide-waiter” came aboard the ship, and no part of the cargo could be landed until he had made a list of the cargo and searched for contraband. The cargo was then landed under supervision of a “landwaiter,” who checked the goods as they came from the ship, after which a weigher and gauger examined dutiable items for customs assessments. When illegal goods were found, they were seized and stored for closer inspection or further action. If information obtained by the collector, tidewaiter, and land-waiter was in conformity, a customs fee was assessed, and the goods could be claimed when the duties were paid or satisfactory arrangements had been made for payment. The process of entering a cargo was more-or-less reversed when a vessel was cleared for departure.7 The customs service was the chief mechanism for enforcing the Acts of Trade and Navigation in North America and the West Indies. At first, enforcement had been the responsibility of colonial governors, but local control bred connivance and uneven application of the law. In October 1671, Charles II appointed the first royal customs officer in the colonies—Dudley Digges, a native of Virginia—and two years later Parliament approved extension of the customs service to English America.8 These measures were intended to check the continuing Dutch presence in colonial trade— particularly in the Chesapeake. But persistent disregard of the law “by the artifice and cunning of ill-disposed persons” led to passage in 1696 of the “Act for Preventing Frauds, and Regulating Abuses in the Plantation Trade,” the last of the Acts of Trade and Navigation.9 By authorizing general search warrants—known as writs of assistance—and allowing forcible entry where there was suspicion of concealment of contraband, the Act of 1696 put colonial customs officers on the same footing as their English counterparts. Customs officials in British North America confronted a long coastline in-

Thi engraved print by Paul Revere depicts British soldiers landing in Boston Harbor in 1768 after the American colonists rioted in protest of the Townshend Acts. A cartouche in the lower right corner shows a Native American, a symbol of colonial America, with his foot on the neck of a British soldier. dented by coves, rivers, creeks, and inlets— ideal for the running of contraband and undermining the authority of the customs service. Coastlines in the British Caribbean were not so daunting. There, the challenge lay in the proximity of foreign ports, eager to exchange their sugar and molasses for fish, flour, lumber, and the miscellaneous produce of North America. To confront these threats, in the second decade of the eighteenth century the American customs was split into three departments, each responsible to the Commissioners of the Customs in London. On the North American mainland, the northern department included customs districts extending from Newfoundland to New Jersey; the southern department took in those from Pennsylvania to the Carolinas, with the addition of Bermuda and the Bahamas; the third department encompassed the islands of the British West Indies.10 Even so, the reluctance of the Treasury to increase the number of customs officials and the unwillingness of the Admiralty to furnish a sufficient number of vessels to interdict offenders in American waters increased the likelihood of successful avoidance of customs regulations by determined smugglers.11 By the middle decades of the eighteenth century, it was evident that only a small fraction of anticipated customs revenue was

actually being collected. Nothing of consequence was done until Parliament’s passage of the Customs Enforcement Act of 1763, legislation that deputized officers of the Royal Navy as customs agents. Although this reform achieved moderate success, it transformed naval officers from the protectors of colonial trade to its nemesis. A year later, the customs establishment in America was again reorganized, this time into five departments, three on the mainland and two in the islands. Then in 1767— in an effort at ongoing reform—an American Board of Customs Commissioners, headquartered in Boston and responsible directly to the Treasury, was given jurisdiction over the entire North American continent (along with Bermuda and the Bahamas), with Jamaica and the other West Indian islands remaining under the control of the London Customs Board.12 Reform brought positive change. That is, if positive change is understood as an increase in customs receipts. But it also contributed to rising discontent in British America that fueled the coming of the American Revolution. Measuring the effectiveness of the customs service in British America is not so easy. Strict observance of the complex customs code was almost impossible, and few men in the service were fully conversant