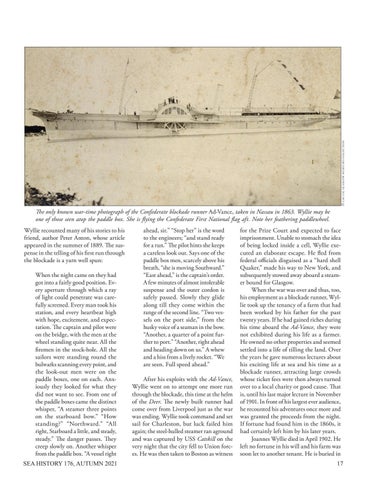 The only known war-time photograph of the Confederate blockade runner Ad-Vance, taken in Nassau in 1863. Wyllie may be one of those seen atop the paddle box. She is flying the Confederate First National flag aft. Note her feathering paddlewheel. Wyllie recounted many of his stories to his friend, author Peter Anton, whose article appeared in the summer of 1889. The suspense in the telling of his first run through the blockade is a yarn well spun: When the night came on they had got into a fairly good position. Every aperture through which a ray of light could penetrate was carefully screened. Every man took his station, and every heartbeat high with hope, excitement, and expectation. The captain and pilot were on the bridge, with the men at the wheel standing quite near. All the firemen in the stock-hole. All the sailors were standing round the bulwarks scanning every point, and the look-out men were on the paddle boxes, one on each. Anxiously they looked for what they did not want to see. From one of the paddle boxes came the distinct whisper, “A steamer three points on the starboard bow.” “How standing?” “Northward.” “All right, Starboard a little, and steady, steady.” The danger passes. They creep slowly on. Another whisper from the paddle box. “A vessel right

ahead, sir.” “Stop her” is the word to the engineers; “and stand ready for a run.” The pilot hints she keeps a careless look out. Says one of the paddle box men, scarcely above his breath, “she is moving Southward.” “East ahead,” is the captain’s order. A few minutes of almost intolerable suspense and the outer cordon is safely passed. Slowly they glide along till they come within the range of the second line. “Two vessels on the port side,” from the husky voice of a seaman in the bow. “Another, a quarter of a point further to port.” “Another, right ahead and heading down on us.” A whew and a hiss from a lively rocket. “We are seen. Full speed ahead.” After his exploits with the Ad-Vance, Wyllie went on to attempt one more run through the blockade, this time at the helm of the Deer. The newly built runner had come over from Liverpool just as the war was ending. Wyllie took command and set sail for Charleston, but luck failed him again; the steel-hulled steamer ran aground and was captured by USS Catskill on the very night that the city fell to Union forces. He was then taken to Boston as witness

for the Prize Court and expected to face imprisonment. Unable to stomach the idea of being locked inside a cell, Wyllie executed an elaborate escape. He fled from federal officials disguised as a “hard shell Quaker,” made his way to New York, and subsequently stowed away aboard a steamer bound for Glasgow. When the war was over and thus, too, his employment as a blockade runner, Wyllie took up the tenancy of a farm that had been worked by his father for the past twenty years. If he had gained riches during his time aboard the Ad-Vance, they were not exhibited during his life as a farmer. He owned no other properties and seemed settled into a life of tilling the land. Over the years he gave numerous lectures about his exciting life at sea and his time as a blockade runner, attracting large crowds whose ticket fees were then always turned over to a local charity or good cause. That is, until his last major lecture in November of 1901. In front of his largest ever audience, he recounted his adventures once more and was granted the proceeds from the night. If fortune had found him in the 1860s, it had certainly left him by his later years. Joannes Wyllie died in April 1902. He left no fortune in his will and his farm was soon let to another tenant. He is buried in