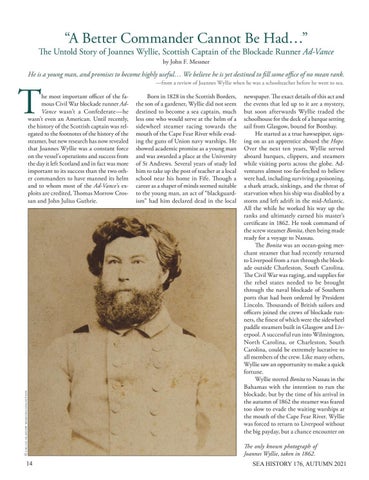 “A Better Commander Cannot Be Had…”

He is a young man, and promises to become highly useful… We believe he is yet destined to fill some office of no mean rank.

he most important officer of the famous Civil War blockade runner AdVance wasn’t a Confederate—he wasn’t even an American. Until recently, the history of the Scottish captain was relegated to the footnotes of the history of the steamer, but new research has now revealed that Joannes Wyllie was a constant force on the vessel’s operations and success from the day it left Scotland and in fact was more important to its success than the two other commanders to have manned its helm and to whom most of the Ad-Vance’s exploits are credited, Thomas Morrow Crossan and John Julius Guthrie.

—from a review of Joannes Wyllie when he was a schoolteacher before he went to sea.

Born in 1828 in the Scottish Borders, the son of a gardener, Wyllie did not seem destined to become a sea captain, much less one who would serve at the helm of a sidewheel steamer racing towards the mouth of the Cape Fear River while evading the guns of Union navy warships. He showed academic promise as a young man and was awarded a place at the University of St Andrews. Several years of study led him to take up the post of teacher at a local school near his home in Fife. Though a career as a shaper of minds seemed suitable to the young man, an act of “blackguardism” had him declared dead in the local

newspaper. The exact details of this act and the events that led up to it are a mystery, but soon afterwards Wyllie traded the schoolhouse for the deck of a barque setting sail from Glasgow, bound for Bombay. He started as a true hawsepiper, signing on as an apprentice aboard the Hope. Over the next ten years, Wyllie served aboard barques, clippers, and steamers while visiting ports across the globe. Adventures almost too far-fetched to believe were had, including surviving a poisoning, a shark attack, sinkings, and the threat of starvation when his ship was disabled by a storm and left adrift in the mid-Atlantic. All the while he worked his way up the ranks and ultimately earned his master’s certificate in 1862. He took command of the screw steamer Bonita, then being made ready for a voyage to Nassau. The Bonita was an ocean-going merchant steamer that had recently returned to Liverpool from a run through the blockade outside Charleston, South Carolina. The Civil War was raging, and supplies for the rebel states needed to be brought through the naval blockade of Southern ports that had been ordered by President Lincoln. Thousands of British sailors and officers joined the crews of blockade runners, the finest of which were the sidewheel paddle steamers built in Glasgow and Liverpool. A successful run into Wilmington, North Carolina, or Charleston, South Carolina, could be extremely lucrative to all members of the crew. Like many others, Wyllie saw an opportunity to make a quick fortune. Wyllie steered Bonita to Nassau in the Bahamas with the intention to run the blockade, but by the time of his arrival in the autumn of 1862 the steamer was feared too slow to evade the waiting warships at the mouth of the Cape Fear River. Wyllie was forced to return to Liverpool without the big payday, but a chance encounter on The only known photograph of Joannes Wyllie, taken in 1862. SEA HISTORY 176, AUTUMN 2021