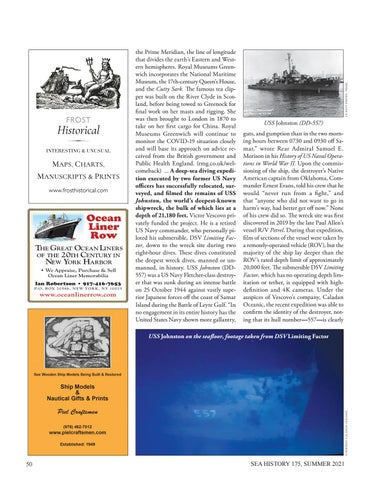 the Prime Meridian, the line of longitude that divides the earth’s Eastern and Western hemispheres. Royal Museums Greenwich incorporates the National Maritime Museum, the 17th-century Queen’s House, and the Cutty Sark. The famous tea clipper was built on the River Clyde in Scotland, before being towed to Greenock for final work on her masts and rigging. She was then brought to London in 1870 to take on her first cargo for China. Royal Museums Greenwich will continue to monitor the COVID-19 situation closely and will base its approach on advice received from the British government and Public Health England. (rmg.co.uk/welcomeback) ... A deep-sea diving expedition executed by two former US Navy officers has successfully relocated, surveyed, and filmed the remains of USS Johnston, the world’s deepest-known shipwreck, the bulk of which lies at a depth of 21,180 feet. Victor Vescovo privately funded the project. He is a retired US Navy commander, who personally piloted his submersible, DSV Limiting Factor, down to the wreck site during two eight-hour dives. These dives constituted the deepest wreck dives, manned or unmanned, in history. USS Johnston (DD557) was a US Navy Fletcher-class destroyer that was sunk during an intense battle on 25 October 1944 against vastly superior Japanese forces off the coast of Samar Island during the Battle of Leyte Gulf. “In no engagement in its entire history has the United States Navy shown more gallantry,

USS Johnston (DD-557) guts, and gumption than in the two morning hours between 0730 and 0930 off Samar,” wrote Rear Admiral Samuel E. Morison in his History of US Naval Operations in World War II. Upon the commissioning of the ship, the destroyer’s Native American captain from Oklahoma, Commander Ernest Evans, told his crew that he would “never run from a fight,” and that “anyone who did not want to go in harm’s way, had better get off now.” None of his crew did so. The wreck site was first discovered in 2019 by the late Paul Allen’s vessel R/V Petrel. During that expedition, film of sections of the vessel were taken by a remotely-operated vehicle (ROV), but the majority of the ship lay deeper than the ROV’s rated depth limit of approximately 20,000 feet. The submersible DSV Limiting Factor, which has no operating depth limitation or tether, is equipped with highdefinition and 4K cameras. Under the auspices of Vescovo’s company, Caladan Oceanic, the recent expedition was able to confirm the identity of the destroyer, noting that its hull number—557—is clearly