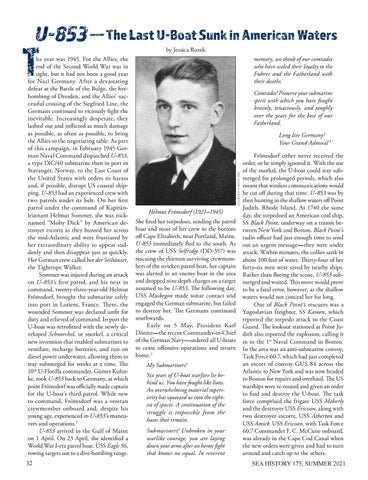 memory, we think of our comrades who have sealed their loyalty to the Fuhrer and the Fatherland with their deaths. Comrades! Preserve your submarine spirit with which you have fought bravely, tenaciously, and toughly over the years for the best of our Fatherland. Long live Germany! Your Grand Admiral 3

he year was 1945. For the Allies, the end of the Second World War was in sight, but it had not been a good year for Nazi Germany. After a devastating defeat at the Battle of the Bulge, the firebombing of Dresden, and the Allies’ successful crossing of the Siegfried Line, the Germans continued to viciously fight the inevitable. Increasingly desperate, they lashed out and inflicted as much damage as possible, as often as possible, to bring the Allies to the negotiating table. As part of this campaign, in February 1945 German Naval Command dispatched U-853, a type IXC/40 submarine then in port in Stavanger, Norway, to the East Coast of the United States with orders to harass and, if possible, disrupt US coastal shipping. U-853 had an experienced crew with two patrols under its belt. On her first patrol under the command of Kapitänleutnant Helmut Sommer, she was nicknamed “Moby Dick” by American destroyer escorts as they hunted her across the mid-Atlantic and were frustrated by her extraordinary ability to appear suddenly and then disappear just as quickly. Her German crew called her der Seiltänzer, the Tightrope Walker. Sommer was injured during an attack on U-853’s first patrol, and his next in command, twenty-three-year-old Helmut Frömsdorf, brought the submarine safely into port in Lorient, France. There, the wounded Sommer was declared unfit for duty and relieved of command. In port the U-boat was retrofitted with the newly developed Schnorchel, or snorkel, a critical new invention that enabled submarines to ventilate, recharge batteries, and run on diesel power underwater, allowing them to stay submerged for weeks at a time. The 10th U-Flotilla commander, Günter Kuhnke, took U-853 back to Germany, at which point Frömsdorf was officially made captain for the U-boat’s third patrol. While new to command, Frömsdorf was a veteran crewmember onboard and, despite his young age, experienced in U-853’s maneuvers and operations.1 U-853 arrived in the Gulf of Maine on 1 April. On 23 April, she identified a World War I-era patrol boat, USS Eagle 56, towing targets out to a dive-bombing range.

Helmut Frömsdorf (1921–1945) She fired her torpedoes, sending the patrol boat and most of her crew to the bottom off Cape Elizabeth, near Portland, Maine. U-853 immediately fled to the south. As the crew of USS Selfridge (DD-357) was rescuing the thirteen surviving crewmembers of the stricken patrol boat, her captain was alerted to an enemy boat in the area and dropped nine depth charges on a target assumed to be U-853. The following day, USS Muskegon made sonar contact and engaged the German submarine, but failed to destroy her. The Germans continued southwards. Early on 5 May, President Karl Dönitz—the recent Commander-in-Chief of the German Navy—ordered all U-boats to cease offensive operations and return home.2 My Submariners! Six years of U-boat warfare lie behind us. You have fought like lions. An overwhelming material superiority has squeezed us into the tightest of spaces. A continuation of the struggle is impossible from the bases that remain. Submariners! Unbroken in your warlike courage, you are laying down your arms after an heroic fight that knows no equal. In reverent

Frömsdorf either never received the order, or he simply ignored it. With the use of the snorkel, the U-boat could stay submerged for prolonged periods, which also meant that wireless communications would be cut off during that time. U-853 was by then hunting in the shallow waters off Point Judith, Rhode Island. At 1740 the same day, she torpedoed an American coal ship, SS Black Point, underway on a transit between New York and Boston. Black Point’s radio officer had just enough time to send out an urgent message—they were under attack. Within minutes, the collier sank in about 100 feet of water. Thirty-four of her forty-six men were saved by nearby ships. Rather than fleeing the scene, U-853 submerged and waited. This move would prove to be a fatal error, however, as the shallow waters would not conceal her for long. One of Black Point’s rescuers was a Yugoslavian freighter, SS Kamen, which reported the torpedo attack to the Coast Guard. The lookout stationed at Point Judith also reported the explosion, calling it in to the 1st Naval Command in Boston. In the area was an anti-submarine convoy, Task Force 60.7, which had just completed an escort of convoy GUS 84 across the Atlantic to New York and was now headed to Boston for repairs and overhaul. The US warships were re-routed and given an order to find and destroy the U-boat. The task force comprised the frigate USS Moberly and the destroyer USS Ericsson, along with two destroyer escorts, USS Atherton and USS Amick. USS Ericsson, with Task Force 60.7 Commander F. C. McCune onboard, was already in the Cape Cod Canal when the new orders were given and had to turn around and catch up to the others. SEA HISTORY 175, SUMMER 2021