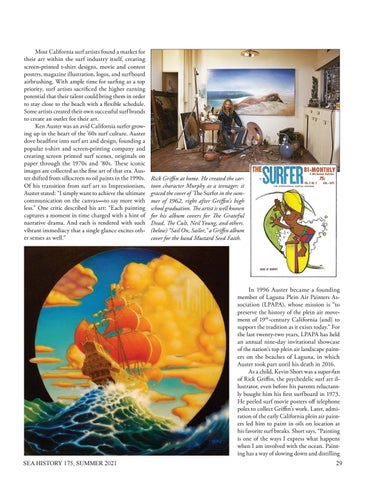 Most California surf artists found a market for their art within the surf industry itself, creating screen-printed t-shirt designs, movie and contest posters, magazine illustration, logos, and surfboard airbrushing. With ample time for surfing as a top priority, surf artists sacrificed the higher earning potential that their talent could bring them in order to stay close to the beach with a flexible schedule. Some artists created their own successful surf brands to create an outlet for their art. Ken Auster was an avid California surfer growing up in the heart of the ’60s surf culture. Auster dove headfirst into surf art and design, founding a popular t-shirt and screen-printing company and creating screen printed surf scenes, originals on paper through the 1970s and ’80s. These iconic images are collected as the fine art of that era. Auster shifted from silkscreen to oil paints in the 1990s. Of his transition from surf art to Impressionism, Auster stated: “I simply want to achieve the ultimate communication on the canvas—to say more with less.” One critic described his art: “Each painting captures a moment in time charged with a hint of narrative drama. And each is rendered with such vibrant immediacy that a single glance excites other senses as well.”

Rick Griffin at home. He created the cartoon character Murphy as a teenager; it graced the cover of  The Surfer in the summer of 1962, right after Griffin’s high school graduation. The artist is well known for his album covers for The Grateful Dead, The Cult, Neil Young, and others. (below) “Sail On, Sailor,” a Griffin album cover for the band Mustard Seed Faith.

In 1996 Auster became a founding member of Laguna Plein Air Painters Association (LPAPA), whose mission is “to preserve the history of the plein air movement of 19th-century California [and] to support the tradition as it exists today.” For the last twenty-two years, LPAPA has held an annual nine-day invitational showcase of the nation’s top plein air landscape painters on the beaches of Laguna, in which Auster took part until his death in 2016. As a child, Kevin Short was a super-fan of Rick Griffin, the psychedelic surf art illustrator, even before his parents reluctantly bought him his first surfboard in 1973. He peeled surf movie posters off telephone poles to collect Griffin’s work. Later, admiration of the early California plein air painters led him to paint in oils on location at his favorite surf breaks. Short says, “Painting is one of the ways I express what happens when I am involved with the ocean. Painting has a way of slowing down and distilling SEA HISTORY 175, SUMMER 2021 29