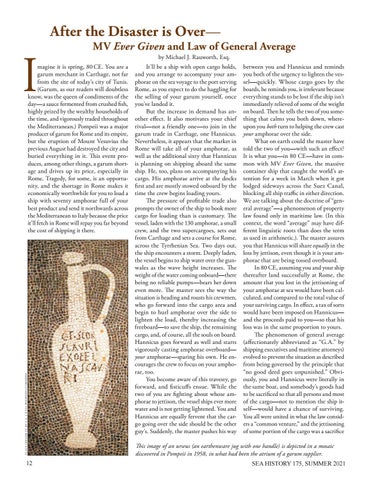 After the Disaster is Over—

MV Ever Given and Law of General Average

magine it is spring, 80 CE. You are a garum merchant in Carthage, not far from the site of today’s city of Tunis. (Garum, as our readers will doubtless know, was the queen of condiments of the day—a sauce fermented from crushed fish, highly prized by the wealthy households of the time, and vigorously traded throughout the Mediterranean.) Pompeii was a major producer of garum for Rome and its empire, but the eruption of Mount Vesuvius the previous August had destroyed the city and buried everything in it. This event produces, among other things, a garum shortage and drives up its price, especially in Rome. Tragedy, for some, is an opportunity, and the shortage in Rome makes it economically worthwhile for you to load a ship with seventy amphorae full of your best product and send it northwards across the Mediterranean to Italy because the price it’ll fetch in Rome will repay you far beyond the cost of shipping it there.

by Michael J. Rauworth, Esq. It’ll be a ship with open cargo holds, and you arrange to accompany your amphorae on the sea voyage to the port serving Rome, as you expect to do the haggling for the selling of your garum yourself, once you’ve landed it. But the increase in demand has another effect. It also motivates your chief rival—not a friendly one—to join in the garum trade in Carthage, one Hannicus. Nevertheless, it appears that the market in Rome will take all of your amphorae, as well as the additional sixty that Hannicus is planning on shipping aboard the same ship. He, too, plans on accompanying his cargo. His amphorae arrive at the docks first and are mostly stowed onboard by the time the crew begins loading yours. The pressure of profitable trade also prompts the owner of the ship to book more cargo for loading than is customary. The vessel, laden with the 130 amphorae, a small crew, and the two supercargoes, sets out from Carthage and sets a course for Rome, across the Tyrrhenian Sea. Two days out, the ship encounters a storm. Deeply laden, the vessel begins to ship water over the gunwales as the wave height increases. The weight of the water coming onboard—there being no reliable pumps—bears her down even more. The master sees the way the situation is heading and rousts his crewmen, who go forward into the cargo area and begin to hurl amphorae over the side to lighten the load, thereby increasing the freeboard—to save the ship, the remaining cargo, and, of course, all the souls on board. Hannicus goes forward as well and starts vigorously casting amphorae overboard— your amphorae—sparing his own. He encourages the crew to focus on your amphorae, too. You become aware of this travesty, go forward, and fisticuffs ensue. While the two of you are fighting about whose amphorae to jettison, the vessel ships ever more water and is not getting lightened. You and Hannicus are equally fervent that the cargo going over the side should be the other guy’s. Suddenly, the master pushes his way

between you and Hannicus and reminds you both of the urgency to lighten the vessel—quickly. Whose cargo goes by the boards, he reminds you, is irrelevant because everything stands to be lost if the ship isn’t immediately relieved of some of the weight on board. Then he tells the two of you something that calms you both down, whereupon you both turn to helping the crew cast your amphorae over the side. What on earth could the master have told the two of you—with such an effect? It is what you—in 80 CE—have in common with MV Ever Given, the massive container ship that caught the world’s attention for a week in March when it got lodged sideways across the Suez Canal, blocking all ship traffic in either direction. We are talking about the doctrine of “general average”—a phenomenon of property law found only in maritime law. (In this context, the word “average” may have different linguistic roots than does the term as used in arithmetic.). The master assures you that Hannicus will share equally in the loss by jettison, even though it is your amphorae that are being tossed overboard. In 80 CE, assuming you and your ship thereafter land successfully at Rome, the amount that you lost in the jettisoning of your amphorae at sea would have been calculated, and compared to the total value of your surviving cargo. In effect, a tax of sorts would have been imposed on Hannicus— and the proceeds paid to you—so that his loss was in the same proportion to yours. The phenomenon of general average (affectionately abbreviated as “G.A.” by shipping executives and maritime attorneys) evolved to prevent the situation as described from being governed by the principle that “no good deed goes unpunished.” Obviously, you and Hannicus were literally in the same boat, and somebody’s goods had to be sacrificed so that all persons and most of the cargo—not to mention the ship itself—would have a chance of surviving. You all were united in what the law considers a “common venture,” and the jettisoning of some portion of the cargo was a sacrifice

This image of an urseus (an earthenware jug with one handle) is depicted in a mosaic discovered in Pompeii in 1958, in what had been the atrium of a garum supplier. SEA HISTORY 175, SUMMER 2021