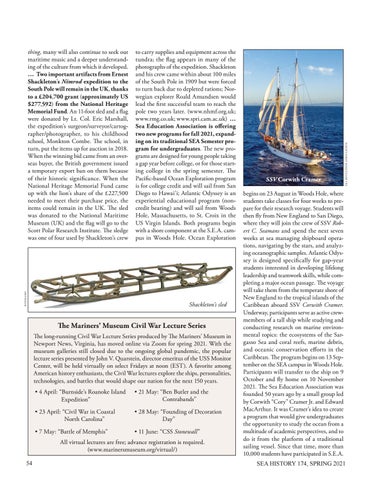 to carry supplies and equipment across the tundra; the flag appears in many of the photographs of the expedition. Shackleton and his crew came within about 100 miles of the South Pole in 1909 but were forced to turn back due to depleted rations; Norwegian explorer Roald Amundsen would lead the first successful team to reach the pole two years later. (www.nhmf.org.uk; www.rmg.co.uk; www.spri.cam.ac.uk) … Sea Education Association is offering two new programs for fall 2021, expanding on its traditional SEA Semester program for undergraduates. The new programs are designed for young people taking a gap year before college, or for those starting college in the spring semester. The Pacific-based Ocean Exploration program is for college credit and will sail from San Diego to Hawai’i; Atlantic Odyssey is an experiential educational program (noncredit bearing) and will sail from Woods Hole, Massachusetts, to St. Croix in the US Virgin Islands. Both programs begin with a shore component at the S.E.A. campus in Woods Hole. Ocean Exploration

The Mariners’ Museum Civil War Lecture Series The long-running Civil War Lecture Series produced by The Mariners’ Museum in Newport News, Virginia, has moved online via Zoom for spring 2021. With the museum galleries still closed due to the ongoing global pandemic, the popular lecture series presented by John V. Quarstein, director emeritus of the USS Monitor Center, will be held virtually on select Fridays at noon (EST). A favorite among American history enthusiasts, the Civil War lectures explore the ships, personalities, technologies, and battles that would shape our nation for the next 150 years. • 4 April: “Burnside’s Roanoke Island Expedition”

All virtual lectures are free; advance registration is required. (www.marinersmuseum.org/virtual/) 54

thing, many will also continue to seek out maritime music and a deeper understanding of the culture from which it developed. … Two important artifacts from Ernest Shackleton’s Nimrod expedition to the South Pole will remain in the UK, thanks to a £204,700 grant (approximately US $277,592) from the National Heritage Memorial Fund. An 11-foot sled and a flag were donated by Lt. Col. Eric Marshall, the expedition’s surgeon/surveyor/cartographer/photographer, to his childhood school, Monkton Combe. The school, in turn, put the items up for auction in 2018. When the winning bid came from an overseas buyer, the British government issued a temporary export ban on them because of their historic significance. When the National Heritage Memorial Fund came up with the lion’s share of the £227,500 needed to meet their purchase price, the items could remain in the UK. The sled was donated to the National Maritime Museum (UK) and the flag will go to the Scott Polar Research Institute. The sledge was one of four used by Shackleton’s crew

begins on 23 August in Woods Hole, where students take classes for four weeks to prepare for their research voyage. Students will then fly from New England to San Diego, where they will join the crew of SSV Robert C. Seamans and spend the next seven weeks at sea managing shipboard operations, navigating by the stars, and analyzing oceanographic samples. Atlantic Odyssey is designed specifically for gap-year students interested in developing lifelong leadership and teamwork skills, while completing a major ocean passage. The voyage will take them from the temperate shore of New England to the tropical islands of the Caribbean aboard SSV Corwith Cramer. Underway, participants serve as active crewmembers of a tall ship while studying and conducting research on marine environmental topics: the ecosystems of the Sargasso Sea and coral reefs, marine debris, and oceanic conservation efforts in the Caribbean. The program begins on 13 September on the SEA campus in Woods Hole. Participants will transfer to the ship on 9 October and fly home on 10 November 2021. The Sea Education Association was founded 50 years ago by a small group led by Corwith “Cory” Cramer Jr. and Edward MacArthur. It was Cramer’s idea to create a program that would give undergraduates the opportunity to study the ocean from a multitude of academic perspectives, and to do it from the platform of a traditional sailing vessel. Since that time, more than 10,000 students have participated in S.E.A. SEA HISTORY 174, SPRING 2021