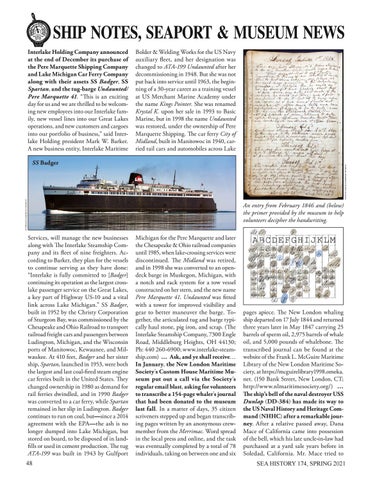 Interlake Holding Company announced at the end of December its purchase of the Pere Marquette Shipping Company and Lake Michigan Car Ferry Company along with their assets SS Badger, SS Spartan, and the tug-barge Undaunted/ Pere Marquette 41. “This is an exciting day for us and we are thrilled to be welcoming new employees into our Interlake family, new vessel lines into our Great Lakes operations, and new customers and cargoes into our portfolio of business,” said Interlake Holding president Mark W. Barker. A new business entity, Interlake Maritime

Bolder &amp; Welding Works for the US Navy auxiliary fleet, and her designation was changed to ATA-199 Undaunted after her decommissioning in 1948. But she was not put back into service until 1963, the beginning of a 30-year career as a training vessel at US Merchant Marine Academy under the name Kings Pointer. She was renamed Krystal K. upon her sale in 1993 to Basic Marine, but in 1998 the name Undaunted was restored, under the ownership of Pere Marquette Shipping. The car ferry City of Midland, built in Manitowoc in 1940, carried rail cars and automobiles across Lake

An entry from February 1846 and (below) the primer provided by the museum to help volunteers decipher the handwriting. Services, will manage the new businesses along with The Interlake Steamship Company and its fleet of nine freighters. According to Barker, they plan for the vessels to continue serving as they have done: “Interlake is fully committed to [Badger] continuing its operation as the largest crosslake passenger service on the Great Lakes, a key part of Highway US-10 and a vital link across Lake Michigan.” SS Badger, built in 1952 by the Christy Corporation of Sturgeon Bay, was commissioned by the Chesapeake and Ohio Railroad to transport railroad freight cars and passengers between Ludington, Michigan, and the Wisconsin ports of Manitowoc, Kewaunee, and Milwaukee. At 410 feet, Badger and her sister ship, Spartan, launched in 1953, were both the largest and last coal-fired steam engine car ferries built in the United States. They changed ownership in 1980 as demand for rail ferries dwindled, and in 1990 Badger was converted to a car ferry, while Spartan remained in her slip in Ludington. Badger continues to run on coal, but—since a 2014 agreement with the EPA—the ash is no longer dumped into Lake Michigan, but stored on board, to be disposed of in landfills or used in cement production. The tug ATA-199 was built in 1943 by Gulfport

Michigan for the Pere Marquette and later the Chesapeake &amp; Ohio railroad companies until 1985, when lake-crossing services were discontinued. The Midland was retired, and in 1998 she was converted to an opendeck barge in Muskegon, Michigan, with a notch and rack system for a tow vessel constructed on her stern, and the new name Pere Marquette 41. Undaunted was fitted with a tower for improved visibility and gear to better maneuver the barge. Together, the articulated tug and barge typically haul stone, pig iron, and scrap. (The Interlake Steamship Company, 7300 Engle Road, Middleburg Heights, OH 44130; Ph: 440 260-6900; www.interlake-steamship.com) … Ask, and ye shall receive… In January, the New London Maritime Society’s Custom House Maritime Museum put out a call via the Society’s regular email blast, asking for volunteers to transcribe a 154-page whaler’s journal that had been donated to the museum last fall. In a matter of days, 35 citizen scriveners stepped up and began transcribing pages written by an anonymous crewmember from the Merrimac. Word spread in the local press and online, and the task was eventually completed by a total of 78 individuals, taking on between one and six

pages apiece. The New London whaling ship departed on 17 July 1844 and returned three years later in May 1847 carrying 25 barrels of sperm oil, 2,975 barrels of whale oil, and 5,000 pounds of whalebone. The transcribed journal can be found at the website of the Frank L. McGuire Maritime Library of the New London Maritime Society, at https://mcguirelibrary1998.omeka. net. (150 Bank Street, New London, CT; http://www.nlmaritimesociety.org/) … The ship’s bell of the naval destroyer USS Dunlap (DD-384) has made its way to the US Naval History and Heritage Command (NHHC) after a remarkable journey. After a relative passed away, Dana Mace of California came into possession of the bell, which his late uncle-in-law had purchased at a yard sale years before in Soledad, California. Mr. Mace tried to SEA HISTORY 174, SPRING 2021