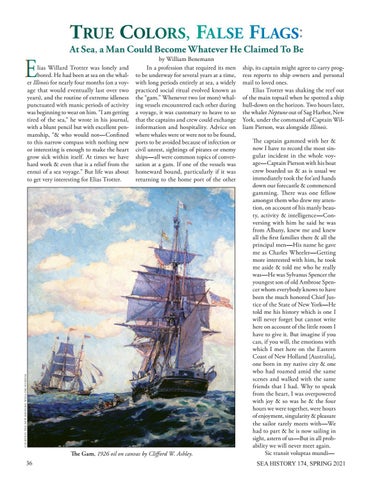 At Sea, a Man Could Become Whatever He Claimed To Be

lias Willard Trotter was lonely and bored. He had been at sea on the whaler Illinois for nearly four months (on a voyage that would eventually last over two years), and the routine of extreme idleness punctuated with manic periods of activity was beginning to wear on him. “I am getting tired of the sea,” he wrote in his journal, with a blunt pencil but with excellent penmanship, “&amp; who would not—Confined to this narrow compass with nothing new or interesting is enough to make the heart grow sick within itself. At times we have hard work &amp; even that is a relief from the ennui of a sea voyage.” But life was about to get very interesting for Elias Trotter.

by William Benemann In a profession that required its men to be underway for several years at a time, with long periods entirely at sea, a widely practiced social ritual evolved known as the “gam.” Whenever two (or more) whaling vessels encountered each other during a voyage, it was customary to heave to so that the captains and crew could exchange information and hospitality. Advice on where whales were or were not to be found, ports to be avoided because of infection or civil unrest, sightings of pirates or enemy ships—all were common topics of conversation at a gam. If one of the vessels was homeward bound, particularly if it was returning to the home port of the other

ship, its captain might agree to carry progress reports to ship owners and personal mail to loved ones. Elias Trotter was shaking the reef out of the main topsail when he spotted a ship hull-down on the horizon. Two hours later, the whaler Neptune out of Sag Harbor, New York, under the command of Captain William Pierson, was alongside Illinois. The captain gammed with her &amp; now I have to record the most singular incident in the whole voyage—Captain Pierson with his boat crew boarded us &amp; as is usual we immediately took the for’ard hands down our forecastle &amp; commenced gamming. There was one fellow amongst them who drew my attention, on account of his manly beauty, activity &amp; intelligence—Conversing with him he said he was from Albany, knew me and knew all the first families there &amp; all the principal men—His name he gave me as Charles Wheeler—Getting more interested with him, he took me aside &amp; told me who he really was—He was Sylvanus Spencer the youngest son of old Ambrose Spencer whom everybody knows to have been the much honored Chief Justice of the State of New York—He told me his history which is one I will never forget but cannot write here on account of the little room I have to give it. But imagine if you can, if you will, the emotions with which I met here on the Eastern Coast of New Holland [Australia], one born in my native city &amp; one who had roamed amid the same scenes and walked with the same friends that I had. Why to speak from the heart, I was overpowered with joy &amp; so was he &amp; the four hours we were together, were hours of enjoyment, singularity &amp; pleasure the sailor rarely meets with—We had to part &amp; he is now sailing in sight, astern of us—But in all probability we will never meet again. Sic transit voluptas mundi— SEA HISTORY 174, SPRING 2021