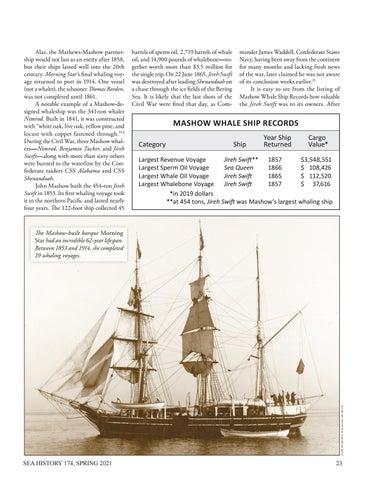 Alas, the Mathews-Mashow partnership would not last as an entity after 1858, but their ships lasted well into the 20th century. Morning Star’s final whaling voyage returned to port in 1914. One vessel (not a whaler), the schooner Thomas Borden, was not completed until 1861. A notable example of a Mashow-designed whaleship was the 341-ton whaler Nimrod. Built in 1841, it was constructed with “white oak, live oak, yellow pine, and locust with copper fastened through.”14 During the Civil War, three Mashow whalers—Nimrod, Benjamin Tucker, and Jireh Swift—along with more than sixty others were burned to the waterline by the Confederate raiders CSS Alabama and CSS Shenandoah. John Mashow built the 454-ton Jireh Swift in 1853. Its first whaling voyage took it to the northern Pacific and lasted nearly four years. The 122-foot ship collected 45

barrels of sperm oil, 2,719 barrels of whale oil, and 14,900 pounds of whalebone—together worth more than $3.5 million for the single trip. On 22 June 1865, Jireh Swift was destroyed after leading Shenandoah on a chase through the ice fields of the Bering Sea. It is likely that the last shots of the Civil War were fired that day, as Com-

mander James Waddell, Confederate States Navy, having been away from the continent for many months and lacking fresh news of the war, later claimed he was not aware of its conclusion weeks earlier.15 It is easy to see from the listing of Mashow Whale Ship Records how valuable the Jireh Swift was to its owners. After

The Mashow-built barque Morning Star had an incredible 62-year lifespan. Between 1853 and 1914, she completed 19 whaling voyages.