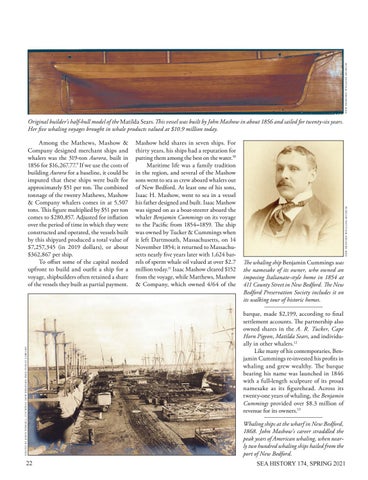 Among the Mathews, Mashow &amp; Company designed merchant ships and whalers was the 319-ton Aurora, built in 1856 for $16,267.77.9 If we use the costs of building Aurora for a baseline, it could be imputed that these ships were built for approximately $51 per ton. The combined tonnage of the twenty Mathews, Mashow &amp; Company whalers comes in at 5,507 tons. This figure multiplied by $51 per ton comes to $280,857. Adjusted for inflation over the period of time in which they were constructed and operated, the vessels built by this shipyard produced a total value of $7,257,345 (in 2019 dollars), or about $362,867 per ship. To offset some of the capital needed upfront to build and outfit a ship for a voyage, shipbuilders often retained a share of the vessels they built as partial payment.

Mashow held shares in seven ships. For thirty years, his ships had a reputation for putting them among the best on the water.10 Maritime life was a family tradition in the region, and several of the Mashow sons went to sea as crew aboard whalers out of New Bedford. At least one of his sons, Isaac H. Mashow, went to sea in a vessel his father designed and built. Isaac Mashow was signed on as a boat-steerer aboard the whaler Benjamin Cummings on its voyage to the Pacific from 1854–1859. The ship was owned by Tucker &amp; Cummings when it left Dartmouth, Massachusetts, on 14 November 1854; it returned to Massachusetts nearly five years later with 1,624 barrels of sperm whale oil valued at over $2.7 million today.11 Isaac Mashow cleared $152 from the voyage, while Matthews, Mashow &amp; Company, which owned 4/64 of the

Original builder’s half-hull model of the Matilda Sears. This vessel was built by John Mashow in about 1856 and sailed for twenty-six years. Her five whaling voyages brought in whale products valued at $10.9 million today.

The whaling ship Benjamin Cummings was the namesake of its owner, who owned an imposing Italianate-style home in 1854 at 411 County Street in New Bedford. The New Bedford Preservation Society includes it on its walking tour of historic homes. barque, made $2,199, according to final settlement accounts. The partnership also owned shares in the A. R. Tucker, Cape Horn Pigeon, Matilda Sears, and individually in other whalers.12 Like many of his contemporaries, Benjamin Cummings re-invested his profits in whaling and grew wealthy. The barque bearing his name was launched in 1846 with a full-length sculpture of its proud namesake as its figurehead. Across its twenty-one years of whaling, the Benjamin Cummings provided over $8.3 million of revenue for its owners.13 Whaling ships at the wharf in New Bedford, 1868. John Mashow’s career straddled the peak years of American whaling, when nearly two hundred whaling ships hailed from the port of New Bedford. SEA HISTORY 174, SPRING 2021