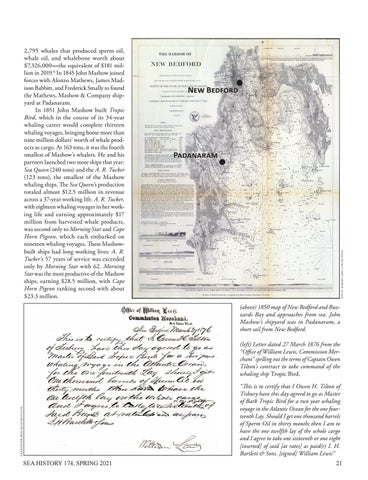 2,795 whales that produced sperm oil, whale oil, and whalebone worth about $7,326,000—the equivalent of $181 million in 2019.8 In 1845 John Mashow joined forces with Alonzo Mathews, James Madison Babbitt, and Frederick Smally to found the Mathews, Mashow &amp; Company shipyard at Padanaram. In 1851 John Mashow built Tropic Bird, which in the course of its 34-year whaling career would complete thirteen whaling voyages, bringing home more than nine million dollars’ worth of whale products as cargo. At 163 tons, it was the fourth smallest of Mashow’s whalers. He and his partners launched two more ships that year: Sea Queen (240 tons) and the A. R. Tucker (123 tons), the smallest of the Mashow whaling ships. The Sea Queen’s production totaled almost $12.5 million in revenue across a 37-year working life. A. R. Tucker, with eighteen whaling voyages in her working life and earning approximately $17 million from harvested whale products, was second only to Morning Star and Cape Horn Pigeon, which each embarked on nineteen whaling voyages. These Mashowbuilt ships had long working lives: A. R. Tucker’s 57 years of service was exceeded only by Morning Star with 62. Morning Star was the most productive of the Mashow ships, earning $28.5 million, with Cape Horn Pigeon ranking second with about $23.3 million.

(above) 1850 map of New Bedford and Buzzards Bay and approaches from sea. John Mashow’s shipyard was in Padanaram, a short sail from New Bedford.

(left) Letter dated 27 March 1876 from the “Office of William Lewis, Commission Merchant” spelling out the terms of Captain Owen Tilton’s contract to take command of the whaling ship Tropic Bird. “This is to certify that I Owen H. Tilton of Tisbury have this day agreed to go as Master of Bark Tropic Bird for a two year whaling voyage in the Atlantic Ocean for the one fourteenth Lay. Should I get one thousand barrels of Sperm Oil in thirty months then I am to have the one twelfth lay of the whole cargo and I agree to take one sixteenth or one eight [inserted] of said [at rates] as paid(r) I. H. Bartlett &amp; Sons. [signed] William Lewis”