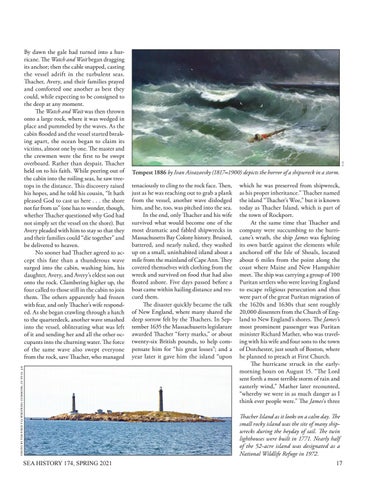 photo by tim piece via wikipedia commons, cc by sa 3.0

By dawn the gale had turned into a hurricane. The Watch and Wait began dragging its anchor; then the cable snapped, casting the vessel adrift in the turbulent seas. Thacher, Avery, and their families prayed and comforted one another as best they could, while expecting to be consigned to the deep at any moment. The Watch and Wait was then thrown onto a large rock, where it was wedged in place and pummeled by the waves. As the cabin flooded and the vessel started breaking apart, the ocean began to claim its victims, almost one by one. The master and the crewmen were the first to be swept overboard. Rather than despair, Thacher held on to his faith. While peering out of the cabin into the roiling seas, he saw treetops in the distance. This discovery raised his hopes, and he told his cousin, “It hath pleased God to cast us here . . . the shore not far from us” (one has to wonder, though, whether Thacher questioned why God had not simply set the vessel on the shore). But Avery pleaded with him to stay so that they and their families could “die together” and be delivered to heaven. No sooner had Thacher agreed to accept this fate than a thunderous wave surged into the cabin, washing him, his daughter, Avery, and Avery’s eldest son out onto the rock. Clambering higher up, the four called to those still in the cabin to join them. The others apparently had frozen with fear, and only Thacher’s wife responded. As she began crawling through a hatch to the quarterdeck, another wave smashed into the vessel, obliterating what was left of it and sending her and all the other occupants into the churning water. The force of the same wave also swept everyone from the rock, save Thacher, who managed

Tempest 1886 by Ivan Aivazovsky (1817–1900) depicts the horror of a shipwreck in a storm. tenaciously to cling to the rock face. Then, just as he was reaching out to grab a plank from the vessel, another wave dislodged him, and he, too, was pitched into the sea. In the end, only Thacher and his wife survived what would become one of the most dramatic and fabled shipwrecks in Massachusetts Bay Colony history. Bruised, battered, and nearly naked, they washed up on a small, uninhabited island about a mile from the mainland of Cape Ann. They covered themselves with clothing from the wreck and survived on food that had also floated ashore. Five days passed before a boat came within hailing distance and rescued them. The disaster quickly became the talk of New England, where many shared the deep sorrow felt by the Thachers. In September 1635 the Massachusetts legislature awarded Thacher “forty marks,” or about twenty-six British pounds, to help compensate him for “his great losses”; and a year later it gave him the island “upon

which he was preserved from shipwreck, as his proper inheritance.” Thacher named the island “Thacher’s Woe,” but it is known today as Thacher Island, which is part of the town of Rockport. At the same time that Thacher and company were succumbing to the hurricane’s wrath, the ship James was fighting its own battle against the elements while anchored off the Isle of Shoals, located about 6 miles from the point along the coast where Maine and New Hampshire meet. The ship was carrying a group of 100 Puritan settlers who were leaving England to escape religious persecution and thus were part of the great Puritan migration of the 1620s and 1630s that sent roughly 20,000 dissenters from the Church of England to New England’s shores. The James’s most prominent passenger was Puritan minister Richard Mather, who was traveling with his wife and four sons to the town of Dorchester, just south of Boston, where he planned to preach at First Church. The hurricane struck in the earlymorning hours on August 15. “The Lord sent forth a most terrible storm of rain and easterly wind,” Mather later recounted, “whereby we were in as much danger as I think ever people were.” The James’s three Thacher Island as it looks on a calm day. The small rocky island was the site of many shipwrecks during the heyday of sail. The twin lighthouses were built in 1771. Nearly half of the 52-acre island was designated as a National Wildlife Refuge in 1972.