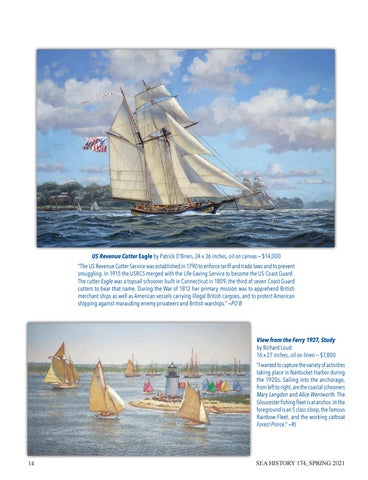 “The US Revenue Cutter Service was established in 1790 to enforce tariff and trade laws and to prevent smuggling. In 1915 the USRCS merged with the Life-Saving Service to become the US Coast Guard. The cutter Eagle was a topsail schooner built in Connecticut in 1809, the third of seven Coast Guard cutters to bear that name. During the War of 1812 her primary mission was to apprehend British merchant ships as well as American vessels carrying illegal British cargoes, and to protect American shipping against marauding enemy privateers and British warships.” —PO’B

“I wanted to capture the variety of activities taking place in Nantucket Harbor during the 1920s. Sailing into the anchorage, from left to right, are the coastal schooners Mary Langdon and Alice Wentworth. The Gloucester fishing fleet is at anchor. In the foreground is an S class sloop, the famous Rainbow Fleet, and the working catboat Forest Prince.” —RL