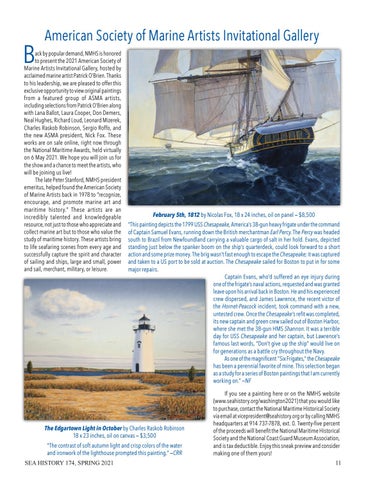 ack by popular demand, NMHS is honored to present the 2021 American Society of Marine Artists Invitational Gallery, hosted by acclaimed marine artist Patrick O’Brien. Thanks to his leadership, we are pleased to offer this exclusive opportunity to view original paintings from a featured group of ASMA artists, including selections from Patrick O’Brien along with Lana Ballot, Laura Cooper, Don Demers, Neal Hughes, Richard Loud, Leonard Mizerek, Charles Raskob Robinson, Sergio Roffo, and the new ASMA president, Nick Fox. These works are on sale online, right now through the National Maritime Awards, held virtually on 6 May 2021. We hope you will join us for the show and a chance to meet the artists, who will be joining us live! The late Peter Stanford, NMHS president emeritus, helped found the American Society of Marine Artists back in 1978 to “recognize, encourage, and promote marine art and maritime history.” These artists are an incredibly talented and knowledgeable resource, not just to those who appreciate and collect marine art but to those who value the study of maritime history. These artists bring to life seafaring scenes from every age and successfully capture the spirit and character of sailing and ships, large and small, power and sail, merchant, military, or leisure.

“This painting depicts the 1799 USS Chesapeake, America’s 38-gun heavy frigate under the command of Captain Samuel Evans, running down the British merchantman Earl Percy. The Percy was headed south to Brazil from Newfoundland carrying a valuable cargo of salt in her hold. Evans, depicted standing just below the spanker boom on the ship’s quarterdeck, could look forward to a short action and some prize money. The brig wasn’t fast enough to escape the Chesapeake; it was captured and taken to a US port to be sold at auction. The Chesapeake sailed for Boston to put in for some major repairs. Captain Evans, who’d suffered an eye injury during one of the frigate’s naval actions, requested and was granted leave upon his arrival back in Boston. He and his experienced crew dispersed, and James Lawrence, the recent victor of the Hornet-Peacock incident, took command with a new, untested crew. Once the Chesapeake’s refit was completed, its new captain and green crew sailed out of Boston Harbor, where she met the 38-gun HMS Shannon. It was a terrible day for USS Chesapeake and her captain, but Lawrence’s famous last words, “Don’t give up the ship” would live on for generations as a battle cry throughout the Navy. As one of the magnificent “Six Frigates,” the Chesapeake has been a perennial favorite of mine. This selection began as a study for a series of Boston paintings that I am currently working on.” —NF

The Edgartown Light in October by Charles Raskob Robinson 18 x 23 inches, oil on canvas — $3,500 “The contrast of soft autumn light and crisp colors of the water and ironwork of the lighthouse prompted this painting.” —CRR

If you see a painting here or on the NMHS website (www.seahistory.org/washington2021) that you would like to purchase, contact the National Maritime Historical Society via email at vicepresident@seahistory.org or by calling NMHS headquarters at 914 737-7878, ext. 0. Twenty-five percent of the proceeds will benefit the National Maritime Historical Society and the National Coast Guard Museum Association, and is tax deductible. Enjoy this sneak preview and consider making one of them yours!