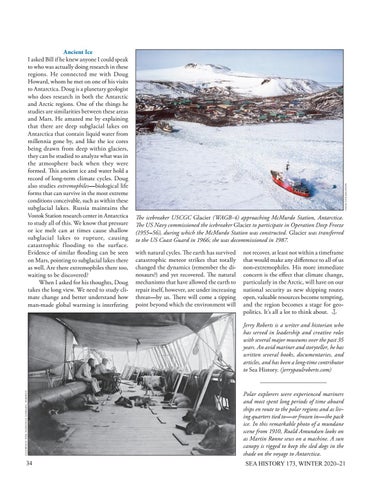 Ancient Ice I asked Bill if he knew anyone I could speak to who was actually doing research in these regions. He connected me with Doug Howard, whom he met on one of his visits to Antarctica. Doug is a planetary geologist who does research in both the Antarctic and Arctic regions. One of the things he studies are similarities between these areas and Mars. He amazed me by explaining that there are deep subglacial lakes on Antarctica that contain liquid water from millennia gone by, and like the ice cores being drawn from deep within glaciers, they can be studied to analyze what was in the atmosphere back when they were formed. This ancient ice and water hold a record of long-term climate cycles. Doug also studies extremophiles—biological life forms that can survive in the most extreme conditions conceivable, such as within these subglacial lakes. Russia maintains the Vostok Station research center in Antarctica to study all of this. We know that pressure or ice melt can at times cause shallow subglacial lakes to rupture, causing catastrophic flooding to the surface. Evidence of similar flooding can be seen on Mars, pointing to subglacial lakes there as well. Are there extremophiles there too, waiting to be discovered? When I asked for his thoughts, Doug takes the long view. We need to study climate change and better understand how man-made global warming is interfering

The icebreaker USCGC Glacier (WAGB-4) approaching McMurdo Station, Antarctica. The US Navy commissioned the icebreaker Glacier to participate in Operation Deep Freeze (1955–56), during which the McMurdo Station was constructed. Glacier was transferred to the US Coast Guard in 1966; she was decommissioned in 1987. with natural cycles. The earth has survived catastrophic meteor strikes that totally changed the dynamics (remember the dinosaurs?) and yet recovered. The natural mechanisms that have allowed the earth to repair itself, however, are under increasing threat—by us. There will come a tipping point beyond which the environment will

not recover, at least not within a timeframe that would make any difference to all of us non-extremophiles. His more immediate concern is the effect that climate change, particularly in the Arctic, will have on our national security as new shipping routes open, valuable resources become tempting, and the region becomes a stage for geopolitics. It’s all a lot to think about.

Jerry Roberts is a writer and historian who has served in leadership and creative roles with several major museums over the past 35 years. An avid mariner and storyteller, he has written several books, documentaries, and articles, and has been a long-time contributor to Sea History. (jerrypaulroberts.com)

Polar explorers were experienced mariners and most spent long periods of time aboard ships en route to the polar regions and as living quarters tied to—or frozen in—the pack ice. In this remarkable photo of a mundane scene from 1910, Roald Amundsen looks on as Martin Rønne sews on a machine. A sun canopy is rigged to keep the sled dogs in the shade on the voyage to Antarctica. SEA HISTORY 173, WINTER 2020–21